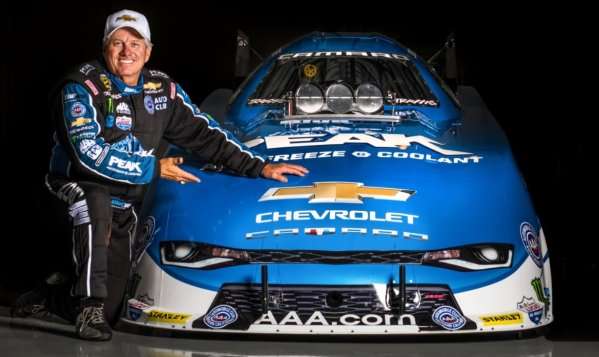 When John Force, Courtney Force and Robert Hight switched over to Chevrolet Camaro funny car bodies last season, they made the move too late in the off-season to properly develop a Camaro body for their race cars. Because of that, the teams spent last season running with modified versions of the Ford Mustang bodies that the team ran the year before. The team started this season with those Mustang-turned-Camaro bodies, but when John Force hits the track this weekend for the Kansas Nationals – he will finally have a proper Chevrolet Camaro funny car body. Courtney Force and Robert Hight will continue running the old body until an unspecified event later this season, but for the first time in a very long time, a purpose built Camaro funny car body will participate in the top ranks of the NHRA.

“The 2016 Camaro has been a great success in the showroom and Chevrolet is proud to contribute to its debut in NHRA’s Funny Car class,” said Jim Campbell, Chevrolet U.S. vice president of performance vehicles and motorsports. “It joins the 2016 COPO Camaro in the Sportsman classes, strengthening Chevrolet’s presence in drag racing, which dates back nearly 60 years.”

The 2016 Camaro Funny Car
Before anyone starts in about how the modern funny cars don’t look anything like the street version – we all know. However, while the Camaro, Mustang and Charger funny car bodies might not look like the production road cars and while they might all have similar shapes, each car has a unique shape. The 2016 Camaro funny car has aerodynamic revisions from front to rear when compared to the old Mustang-based Camaro body, which will allow it to slip through the wind more easily while also creating more downforce at high speeds. More importantly, this new body is expected to be more stable at high speeds, which makes the car safer, but it also improves performance. After all, when the drivers don’t have to work as hard to keep the car steady, they can go faster.

Also, the new Camaro body is lighter than the outgoing body and while the 10,000 horsepower engine has no problems moving a few extra pounds – the lighter, more stable 2016 Camaro funny car should prove to be superior in every way to the outgoing body that Courtney Force and Robert Hight continue to use. Since the team is using two different bodies, we will be able to compare the times of the 2016 Camaro to the 2015 bodies at the first few events to see if the new body really is that much better.

“I started my career in a Chevrolet and I couldn’t be more excited to put this new Camaro SS Funny Car on the track,” said Force. “With all the assistance from Chevrolet, it not only looks great, it’s designed to perform better than anything we’ve had before, with a shape that should help us get down the track quicker and with greater stability.”

Finally, the addition of the 2016 Chevrolet Camaro funny car body to the John Force Racing stable will allow Chevrolet racing fans to root for the team without the Ford-fan trash talk about how JFR is still technically racing in Chevy-badged Mustang funny cars.