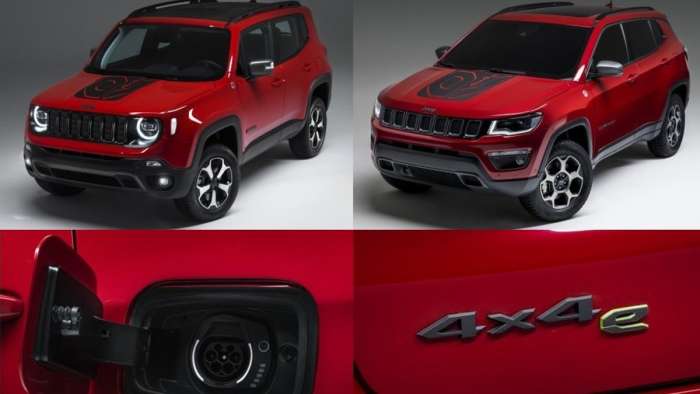 Jeep Introduces a Pair of 4WD Plug-In Hybrids in Geneva

The Jeep Renegade and Compass were introduced this morning at the Geneva International Motor Show with a new plug-in hybrid drivetrain that uses two different power sources to drive the front and rear axles, maintaining the off-road abilities of the brand while offering improved fuel economy and all-electric driving.
Advertisement

FCA used the start of the 2019 Geneva Motor Show to introduce the new plug-in hybrid package for the Jeep Compass and Renegade. While they look like the rest of the model range with the exception of some unique badging, these two small sport utility vehicles integrate electric power like no other vehicle in the company portfolio.

Rather than making a mild hybrid version of the Compass and Renegade with the same electric-assisted turbocharged 4-cylinder engine, the Jeep engineers went a completely different direction with the company’s first plug-in hybrid models.

New Hybrid Design
The 2019 Ram 1500 and the 2019 Jeep Wrangler JL are both offered with a version of the eTorque mild hybrid assist system, with a small electric motor providing added torque to the crankshaft at low points in the power band. While the fact that the eTorque system works on the front of the engine, rather than on the transmission, makes this system unique from most mild hybrid systems, but in the long run, the Ram and Wrangler eTorque system is fairly limited in its function. The system only provides assist – it does not offer any all-electric driving – although it does make a huge difference in erasing any sign of turbo lag in the Wrangler while the Ram benefits from the extra early torque when towing.

More importantly, the eTorque system is fully dependent on integrated charging, so you cannot plug them in and charge up the batteries.

The eAWD hybrid system in new Compass and Renegade is as different as possible from the eTorque system. First, the Compass and Renegade are plug-in models, so you can keep the batteries charged when the vehicle is not in use. Second, rather than an electric engine that adds power directly to the engine, the eAWD system has a dedicated electric motor that drives the rear wheels. The system does not have a driveshaft running from the engine up front to the rear wheels, so each of these vehicles essentially has two separate drivetrains that work together, with the front wheels being powered by the 1.3-liter gasoline engine.

Solid Performance
FCA hasn’t offered concrete power figures for these new plug-in Jeeps, but we know that the Renegade will offer between 190 and 240 horsepower, while the Compass is expected to sit right at 240 horsepower. That number takes into account the power of the electric motor that drives the rear wheels and the gasoline engine that drives the front wheels, with engineers expecting the system to allow the Renegade to sprint from a stop to 62 miles per hour in roughly 7 seconds. That is pretty quick for a compact hybrid SUV.

There is no word on whether FCA plans to introduce these plug-in models in the United States, but with the company facing hefty fines for violating government fleet fuel economy requirements and prior comments about new hybrid technology in the American Jeep lineup, it seems likely that we will get some version of this drivetrain. With the electric rear drive working independently of the gasoline engine that drives the front wheels, there is no reason why the company couldn’t use a larger engine for the US market.

DeanMcManis wrote on March 5, 2019 - 5:34pm Permalink
This is a VERY good move for Chrysler. After their 77 Million dollar fee for not meeting 2016 MPG requirements they have a lot of catching up to do with regards to good fuel economy, and this PHEV drivetrain looks like the ticket. It would be smart of them to offer this hybrid combination in all models that they can. 30+ miles of EV range means that most drivers can run 100% EV except when the need to drive further. I am very glad the Chrysler made this move (as long as they also bring them to the U.S.) as opposed to mild-hybrid solutions, which produce mild improvements.
Eric wrote on March 7, 2019 - 2:26pm Permalink
Jeep needs to perfect this and make full kits for older vehicles. I thought about it on my XJ a few times.