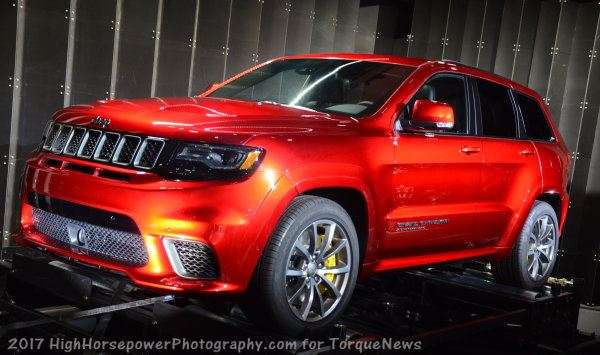 The only key information that we didn’t get at the NYC debut of the Hellcat-powered Jeep Grand Cherokee Trackhawk was the pricing, but with that being such a hot topic, today we will take a look at the possible pricing range of the world’s quickest, fastest and most powerful SUV.
Advertisement

The Jeep Grand Cherokee Trackhawk made its grand debut last week and it continues to be on display at the 2017 New York International Auto Show, giving attendees a chance to meet the world’s quickest, fastest and most powerful sport utility vehicle. As expected, the Trackhawk packs the 6.2L Hellcat Hemi with 707 horsepower and 645lb-ft of torque, allowing it to run an 11.60 quarter mile and a top speed of 180 miles per hour. On top of this all, this high performance machine is capable of towing 7,200lbs.

We learned last week that the Trackhawk is the Mopar super-SUV which we had all dreamed of and while we learned all of the key specifications on the Hellcat Hemi-powered Jeep Grand Cherokee, we didn’t not learn the price. As a result, it seems that every online discussion about the 707hp SUV eventually focuses on the pricing, so here is a look at what I believe could be the pricing for the Jeep Grand Cherokee Trackhawk.

I do want to stress that I do not have information on Trackhawk pricing, but based on what we know about the pricing of the Hellcat Challenger and Hellcat Charger, here is a guess at what kind of MSRP we might see for the Hellcat Jeep.

Whether we are talking about the Challenger or the Charger, the jump from the SRT 392 model to the Hellcat brings about a new engine, but many of the other components are shared. The big brakes, the adaptive suspension, the premium interior and many of the exterior appointments are shared between the SRT 392 and Hellcat cars, so the supercharged Hemi and those supporting items relating to the different engine account for the biggest difference between the two.

Since the SRT 392 and Trackhawk Jeeps will have features a similar level of uniqueness from each other to what we see what the Dodge Charger SRT Hellcat, it seems reasonable to expect that the Grand Cherokee with the Hellcat will have a similar upcharge to the supercharged sedan. In other words, the Trackhawk should be around $16,500 more than the SRT 392 based on the engine upgrades, but we need to keep in mind that the Trackhawk also has a beefier transfer case and a stronger transmission than the SRT 392 models, along with a stronger driveshaft and axle shafts. The Trackhawk also appears to have a far more luxurious interior, but that could also be an option, so it wouldn’t really impact the basic pricing.

So if the Trackhawk has a bigger advantage over the SRT 392 Jeep than the Hellcat Charger has over the SRT 392 sedan, it seems reasonable to expect that the upcharge for the Hellcat Jeep would be more than the $16,500 markup from the Charger. For the sake of discussion, let’s say that these stronger drivetrain bits and the other unique features of the Trackhawk add another $3,000, for a total upcharge for the Hellcat package of $19,500.

While that probably seems like a whole lotta money for a Jeep Grand Cherokee, skeptics need to keep in mind that this is the quickest, fastest and most powerful SUV in the world – making short work of the Porsche Cayenne Turbo S which has an MSRP of $161,600. $88k is a big price tag, but considering that this SUV will carry five people, haul 7,200lbs and outrun almost any stock performance car in the world, it is a small price to pay for the world’s ultimate sport utility vehicle.

Of course, I should close by pointing out that this is purely my own speculation and actual Trackhawk pricing could be significantly higher, but my safe money says that the MSRP will remain south of the $100k mark – if not south of the $90k mark.