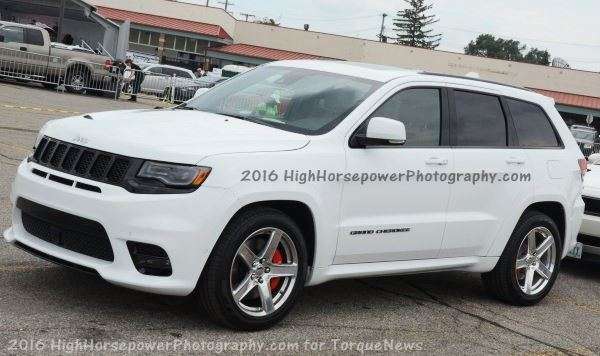 This past weekend while attending the Woodward Dream Cruise, I stumbled across the “Jeep Grand Cherokee SRT Trackhawk with the Hellcat Hemi” that has been making its rounds through the automotive media and having seen it in person – and I still don’t think that it is a Hellcat model.
Advertisement

A few months back, spy shots of a Jeep Grand Cherokee SRT with a front end similar to the one shown above hit the automotive world and immediately, many outlets rushed to insist that this was the fabled Hellcat-powered Jeep. I was skeptical then, considering the cooling and braking needs of the Hellcat Challenger and Hellcat Charger, but having seen this Grand Cherokee in person, I believe even more strongly that this is not a 707 horsepower SUV. That is why I have put “Trackhawk” in quotes throughout this piece, as I don’t think that this is a Hellcat version of the Jeep Grand Cherokee at all, but since so many other outlets insist that it is, I wanted to make the association between the previous spy photos and this bright white sport utility vehicle.

The “Trackhawk” at Woodward
While attending the 2016 Woodward Dream Cruise, I made my stop at the Fiat Chrysler display at the corner of 13 Mile and Woodward and I spent quite a bit of time in that huge area. While there, I made a trip to the port-a-potties tucked behind one of the company’s large display trucks. Upon exiting the facilities, I overheard someone talking about the Hellcat Jeep parked in the adjoining parking lot. At first, I figured that these folks were talking about the Wrangler Trailcat, but as I walked back to the main display area, I saw what they were discussing.

Sitting amongst the normal vehicles (non-show cars) parked in the lot next to the huge Mopar display was what appeared to be the same SRT Jeep that made its rounds via spy shots a while back. It was just sitting there, about 50 feet from the display packed full of Mopar fans and hardly anyone noticed it, but I noticed it. I wandered over to the legendary "Trackhawk" Jeep with my camera out and I snapped a few pictures capturing what I consider to be critical details on this high performance SUV – details which support my early beliefs that the spy shots floating around the interest were not a Hellcat-powered Jeep.

Why This Isn’t a Trackhawk
While the white Jeep Grand Cherokee shown above is most certainly an SRT model, there are a handful of reasons why I (still) don’t think that this is the highly anticipated Trackhawk model.

First and foremost, while it has the heat extractors in the hood that are found on the current Hellcat Dodge cars, it lacks a front facing scoop to pump cool air into the engine bay. Sure, the huge grill of this Jeep could pull in enough air to both cool and feed the Hellcat Hemi, but I don’t believe for one second that the SRT engineers are going to skip a front-facing air inlet on the hood. It might vary from the Dodge Hellcat cars, but I strongly believe that there will be a hood scoop on the Jeep Trackhawk.

Next, take close notice of the wheels and tires on this Jeep Grand Cherokee. This Jeep is wearing a fairly plain 5-spoke wheel wrapped in Pirelli Scorpion Verde tires – a combination which is a far cry from the lightweight wheels and high performance tires found on the Dodge Hellcat cars. Granted, these appear to be new wheels, not offered on the current SRT Jeep, but they definitely don’t seem like the kind of lightweight wheels we would expect on the world’s most powerful SUV. Plus, with the help of all-wheel drive, the Grand Cherokee might be able to get traction with these wheels and tires, but I don’t believe that the SRT engineers will equip the Trackhawk with tires which are so low performance when compared to the tires on the Hellcat cars.

This Jeep is wearing a big Brembo brake setup, but it is not wearing the ultra-high performance front braking package found on the Hellcat Charger and Challenger. With the Hellcat Jeep easily being the heaviest of the three Hellcat-powered vehicles, I expect that it will have the same gigantic braking package as the cars in order to help ensure that the fastest and most powerful SUV in the world is the quickest-stopping SUV in the world.

Finally, the fact that this Jeep Grand Cherokee SRT is just parked in a lot next to the Mopar Woodward display is definitive proof that this is not the highly anticipated Trackhawk. Why do I say that? Because there is no way that the company would park a vehicle like that right in front of tens of thousands of fans after spending so much time and effort keeping it under wraps.

The Trackhawk Jeep Grand Cherokee with Hellcat power is coming, but this SRT-badged test vehicle – the same one which has appeared in countless spy shots – almost surely isn’t it. However, this test vehicle hanging out at the Woodward Dream Cruise gives us our best look yet at what is likely the next SRT (non-Hellcat) Jeep.

SANTOS BECERRA wrote on August 23, 2016 - 7:22pm Permalink
it looks weak i don't like it its the same truck it doesn't look mean or muscular i was going to buy one but i rader buy me a porsche chayenne turbo i am very disappointed too much hype for that sucks big time