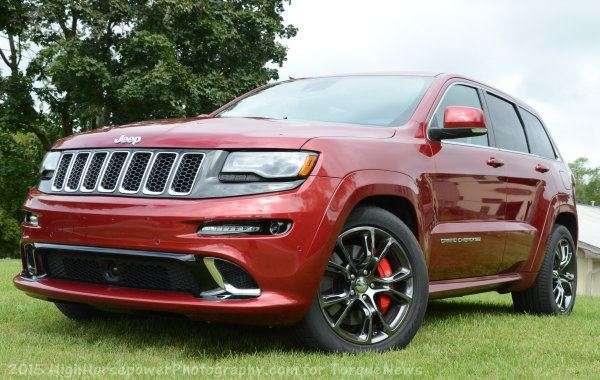 Jeep Grand Cherokee Hellcat is on the Road Now

We have been talking about the possibility of a Jeep Grand Cherokee SRT packing the Hellcat Hemi for months and according to the folks at Motor Authority, that vehicle has not only been given the greenlight – but these same sources insist that there are Hellcat-powered Jeep test mules on the road right now.
Advertisement

The Jeep Grand Cherokee SRT has, for a very long time, been one of the quickest and fastest sport utility vehicles sold in America so when the 2015 Dodge Challenger was introduced with the 707 horsepower Hellcat Hemi, the Mopar community was quick to call for a Hellcat Jeep. A short time after the Hellcat cars hit the market, it was discovered that Chrysler had trademarked the name “Trackhawk” and at that point, the rumors and discussions about a 707 horsepower Jeep really exploded.

Today, all of the folks who have been demanding a Hellcat Jeep Grand Cherokee should be riding high, as an insider report from Motor Authority insists that the Hellcat Jeep has been approved by the company management. It is called Project K and the first test mules are on the road as you read this.

Insider Info on the Hellcat Jeep
Before I get into the specifics of this rumor, I want to point out that none of the information discussed here is official. So far, there has not been a single word from the Chrysler Group regarding a Hellcat powered Jeep Grand Cherokee so anything that you read anywhere online – including this piece – is based on speculation, rumors and unofficial insider information. Granted, this is the kind of information that keeps us all going and, in most cases, insider information turns out to be at least somewhat accurate. I believe this insider information to be true and while the fine details might vary, I don’t doubt that there is a Hellcat Jeep on the way.

More importantly, this insider claims that there are already test mules on the road, with the Hellcat Hemi drivetrain wedged into normal production 2015 Jeep Grand Cherokee bodies, so they look like any other test vehicle, but having driven quite a few Hellcat cars, I believe that it would be impossible for these Hellcat Jeeps to sound like a lower performance model. Based on this, next time you see a Grand Cherokee test mule, pay close attention to how it sounds – you might just be watching the world’s most powerful SUV being tested.

SRT Hellcat or Trackhawk
Provided that there is a Hellcat-powered Jeep Grand Cherokee on the way, we can expect that it will have the supercharged 6.2L Hemi V8 with power levels around 707hp and 650lb-ft of torque. That power will almost certainly be sent through a similar heavy duty 8-speed transmission as the Hellcat Challenger and Charger and putting the power to the ground, we can expect a heavy duty, high performance four wheel drive system. We can also expect a loaded interior and a uniquely designed exterior – but we still don’t know what this super-Jeep might be called.

The Chrysler Group is allegedly calling it Project K and while there is no “K” in SRT Hellcat, there are two Ks in Trackhawk. Coincidence? Perhaps.

Some believe that it will share the naming approach with the Challenger and Charger, which would lead to a Jeep Grand Cherokee SRT Hellcat, but we should keep in mind that when the Chrysler Group dissolved the SRT brand, the intention was for SRT to become a high performance trimline of the Dodge brand. As a result, the SRT Chrysler 300 was expected to be removed (and it is gone), but Jeep was to continue offering the Grand Cherokee SRT, which comes as no surprise considering how well it sells.

Because of the push to make SRT a Dodge-only affair, I would be extremely surprised to see the high performance Jeep called the Grand Cherokee SRT Hellcat. For those same reasons, I believe that the Grand Cherokee Trackhawk will be the world’s most powerful SUV and it will do so with Hellcat power.