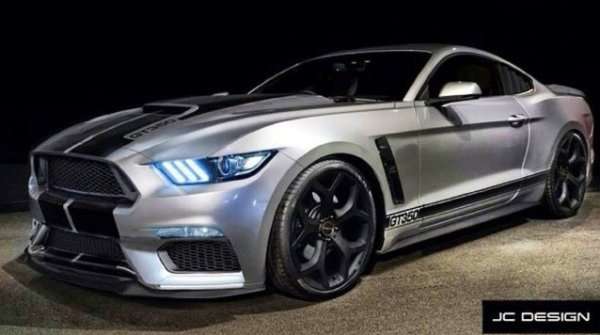 We haven’t talked about the upcoming 2015 Ford Mustang Shelby GT350 in a while as there haven’t been any big bits of information leaked lately, but this new GT350 rendering from JC Designs is worth a second and third look, as I think that this is my new favorite depicting of “what could be” with the next Shelby Mustang.
Advertisement

There has been some confusion in the past, so I want to open this piece by pointing out the fact that this is not an actual image of the 2015 Ford Mustang Shelby GT350. This is an image created by a very skilled computer artist, JC Design, whose work we have featured in past articles here on TorqueNews.com. This newest image was emailed to me by a reader so I do not know where it originated, but just like the past JC Design Mustang GT350 renderings, this Mustang looks like a muscle car with which I could very easily fall in love.

The new JC Designs 2015 Mustang GT350
When we first looked at a JC Design 2015 Ford Mustang, it was in September 2013, before we had even seen the 2015 Mustang GT (Click here for a look at that rendering from 2013). JC Design was working on the next GT500 back then, but it has become far more widely expected that the next generation high performance Mustang will be called the GT350. This new rendering of the GT350 reflects the fact that the artist knows what the base (non-Shelby) Mustang looks like while incorporating cues taken from the various spy shots and videos.

The result is an imagined 2015 Ford Mustang Shelby GT350 that looks great on our computer screen and, based on what we have seen from the various spy shots, this could be very close to the actual appearance of the next generation Shelby Mustang.

Comparing the Artwork to the Spy Footage
Like the mystery 2015 Ford Mustang seen blasting around the Nürburgring, the JC Design Mustang GT350 features a substantially more aggressive front fascia with a chin spoiler that would provide an incredible amount of downforce. This image also has large ducts on the outer corner of the fascia along that would help provide plenty of cooling air to the brakes. While this design isn’t real, I would expect the front end elements of this GT350 to be found on the production Mustang.

Along the sides, this rendering of the 2015 Mustang Shelby GT350 features the same strong body lines that we have seen on the test mules, with the body tucked tightly over the black wheels on both the Nürburgring car and the rendering above. Also, we can see that the JC Design GT350 Mustang has a low profile rear spoiler that looks somewhat similar to the cars spied by photographers in Germany.

The biggest difference between the spy shots and this great looking rendering of the GT350 Mustang is the hood. The hood on the artwork has a sunken center section with an air inlet around the middle of the hood while the car caught in spy shots has no hood scoop.
Again, this is only a rendering based on one artist’s imagination of what the 2015 Ford Mustang Shelby GT350 could look like, but I believe that this piece could unofficially preview the next generation super-Stang.