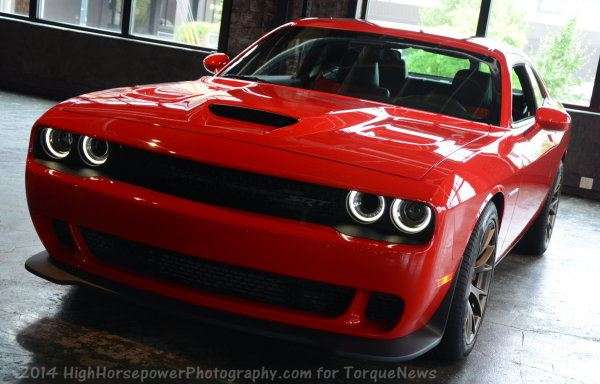 Famous funnyman and car collector Jay Leno recently took a wounded American solider for a ride in the 2015 Dodge Challenger SRT Hellcat and when the ride-and-drive was finished – Leno gave the 707hp Mopar muscle car to the young man who has faced so many health issues as result of a suicide bomber in Afghanistan.
Advertisement

While Jay Leno is best known for his late night TV show and, more recently, his involvement in the automotive industry, he is also very active in programs to support American soldiers. In addition to visiting military installations where he entertains the troops and spends time shaking hands and taking pictures with the men and women of the US Armed Forces as part of the USO program, Leno wanted to do something really special for one soldier.

Out of a collection of names of wounded American soldiers, Leno picked of Cpl. Ethan Laberge and as part of Jay Leno’s special program for this soldier, the two took the 2015 Dodge Challenger SRT Hellcat for a ride. At first, it likely seemed like a fun day for Cpl. Laberge as he rode around in the world’s most powerful muscle car with Jay Leno at the wheel, but by the end of the day – the injured solider would be the proud owner of the Hellcat Challenger.

Cpl. Ethan Laberge’s Story
Cpl. Ethan Laberge was stationed in Afghanistan, working on normal foot patrol when he stopped to talk to some folks along the street. At that moment, a suicide bomber rode up next to Cpl. Laberge and two other US soldiers and detonated himself – severely injuring Laberge and killing his fellow soldiers. Cpl. Laberge sustained serious injuries to both legs and his arm, which have already required 10 surgeries to fix the damage to his body. The Corporal also sustained a head injury which has caused ongoing memory problems.

Cpl. Ethan Laberge is one of the many, many US soldiers who have been injured fighting the terrorists regime in the Middle East and when Jay Leno picked his name out of a group, he was in for a very special day. Jay Leno couldn’t fix Cpl. Laberge’s injuries, but he could give the car loving soldier one very exciting day that would turn into a very exciting new car.

Laberge and Leno Cruise in the Hellcat
As part of this program, Jay Leno surprised Cpl. Ethan Laberge by driving up in the new 2015 Dodge Challenger SRT Hellcat. After showing off the Hellcat to Laberge and a few of his fellow soldiers, Leno asked if Laberge wanted to go for a ride, and of course he said yes. Leno than spent some time cruising around Kentucky in the 707hp muscle car before asking the Corporal if he wanted to drive. Again, it was a resounding yes.

The video segment, which you can watch below, then takes a break from the Challenger as Laberge and Leno talk about the Corporal’s struggles since the day that the suicide bomber changed his life. As the video ends, we see Laberge and Leno drive back to the area where the video began and Leno asks the soldier if he liked the car which, of course, he did…adding that he wouldn’t mind having one. Leno responds simply by saying “It’s yours”.

Visit NBCNews.com for breaking news, world news, and news about the economy

JeffS wrote on November 20, 2014 - 9:09am Permalink
Kudos to Jay. Bigger Kudos to Cpl. Laberge. America's car guy and America's Hero. All our Brave young Men and Women deserve this kind of acknowledgement, gesture and gratitude. They do not get nearly enough. The Land of the Free and the Home of the Brave, because of MEN and WOMEN who serve so selflessly. Drive on Mr. Leno and Cpl. Laberge, Bless you. Patrick, "Thanks" for the article. Just goes to show, sometimes a car is so much more than the sum of its parts.