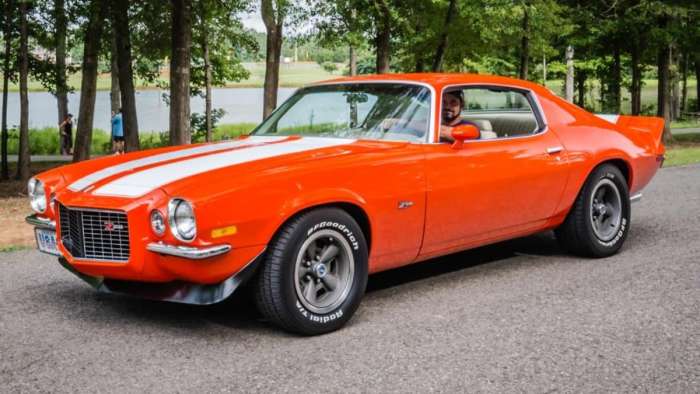 The TorqueNews/Camaros Unlimited Camaro of the Month for January 2019 is pristine Hugger Orange-and-white 1970 RS Z28, owned and loved by Chris Williams.
Advertisement

For January 2019, the members chose this flawless 1970 Chevrolet Camaro RS Z28 in Hugger Orange and after the community picked this car as their favorite for the month, I reached out to Williams for more information on this muscle car.

Chris Williams and Camaro Life
It all started back in 1995. I was 15 years old and I ordered a year one catalog for a 1973 RS Z28 project car that my father helped me buy. That car was a silver/ black stripes and black interior real Z28 but it needed everything.

I would look through the catalog every couple of days looking and wishing. I started noticing a hugger orange/white stripes ‘70 RS Z28 with a 4-speed on some of the pages and I thought “how cool is that color combination”.

Fast forward to 2002, I was buying and selling old project cars for fun. One day out of the blue I travel an hour northeast to Ft. Payne, Alabama to attend a car show in my ‘72 SS 350 Camaro, where I met a guy named Scott. He told me about a Hugger Orange/White stripe/Sandalwood interior Z28 4-speed sitting in an old factory a few blocks away, but it wasn't for sale... I thought just my luck.

A few years later I was talking about this Z28 to a close friend of mine named O.R. Brewer who had a car collection and he agreed to help find out more information about it. A few more years pass and one night he called to tell me that (the orange car) was on eBay. The next morning I contacted the owner and made arrangements to look at it and all the parts.

It was repainted in 1989 but never put back together. Everything was there so I called O.R. and he agreed to purchase it because he had a eBay account and I did not. It was November 2012 and the original plan was that I would purchase that car within a year's time after I reassemble it, but sadly he passed away before Christmas that year. It took some time but I was able to purchase it from his family and continue on with the build.

I considered a late model LS power plant, but decided to go back original as best I could.

What I've learned about the car is that it came from the factory with the Hugger Orange paint, the white stripes, the Sandalwood interior (COPO), the tall three piece rear spoiler and the 4-speed M-21.
I had David Magouyrk machine and rebuild the original engine and carburetor and I detailed everything else.

The ole Z28 drive's and rides like a new dependable car. I don't wash or drive in the rain, I dry her clean only with wax.

My plan is to enjoy the car for years to come.

My father helped me with my first junk Camaro, my late friend O.R. helped land this deal, and my other close friend David Magouyrk helped get this beast back on the road.

Congratulations to Chris Williams and his 1970 Camaro RS Z28 for being named the first Camaro of the Month for 2019. If you would like to participate in the Camaro of the Month program with your Chevy muscle car, click here to join Camaros Unlimited!

Jesse wrote on January 8, 2019 - 10:34pm Permalink
GM, I have said it before and I will say it again.........this is your template for the next generation Camaro. Do away with the aerodynamic styling crap that has been with us for too many generations. There is so little styling differences in cars and suvs today that I have to look for a name or emblem to tell me what I am looking at. The only vehicle that still retains individual styling are pickup trucks. If you can't tell a Ford or Dodge or Chevrolet from each other, better check your pulse. Any time one looks at a car, especially when it is a new model or a redesign, ones' gut with input from your eyes tells your brain what to think. And this is where the Camaro fails. For me it is the lack of positive reaction when I looks at the Camaro. Right now, I like the Dodge Challenger based on my gut.