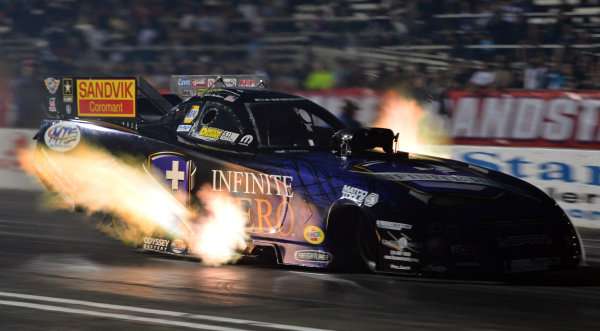 Jack Beckman and his 2015 Dodge Charger R/T funny car came into the final event of the 2015 Mello Yello Drag Racing Championship with a shot of toppling Del Worsham and claiming the season championship, but Del beat Jack in a head to head battle and secured the title for the NHRA’s fastest bodied class.
Advertisement

Jack Beckman and his 2015 Dodge Charger R/T funny car won 6 of the first 18 races this season and Beckman’s Charger-driving teammates won 8 of the 12 races that Beckman didn’t win. During those first 18 races, Del Worsham didn’t win a since final round, but when Del Worsham won 3 of the first 4 events of the Countdown to the Championship, he set up a shootout between Beckman’s Charger and Worsham’s Camry for the 2015 NHRA Funny Car Championship.

Coming into the event, Del Worsham and his Toyota Camry led the funny car championship standings by 38 points over Jack Beckman and his Dodge Charger R/T. Beckman had won 7 events as the teams headed to Pomona for the 24th and final race of the season while Worsham had won 3 events over the course of the season. However, since Worsham had been a consistent final round runner-up during the first 18 races followed by winning 3 of the 5 Countdown races ahead of the final event of the 2015 season, Del’s Toyota was the leader when the cars took to the track for the final run of the year. At the same time, “Fast Jack” Beckman and his Dodge Charger R/T had routinely been the quickest car in the field – often setting track records during both qualifying and eliminations.

Del and his Toyota were the odds-on favorite heading into Pomona based on his Countdown success and his slim points lead, but Fast Jack and his Charger stood a good chance of overpowering their way into the record books.

Dodge Comes Out Fast
In the first round of qualifying for the final event of the 2015 NHRA season, the 2015 Dodge Charger R/T teams came out charging hard. Capps was the top dog early on with a 3.951, followed by Jack Beckman, who ran a 3.964. Matt Hagan and his Charger were 4th with a 3.995 while Tommy Johnson Jr was the only Schumacher car unable to turn a 3-second ET in round 1. Del Worsham had troubles in round 1 and sat 16th with a 6.915.

In round 3, all of the DSR Chargers had slower runs, so none of them were able to improve their qualifying time or their positional standing. Del Worsham, on the other hand, ripped off a 3.941 to jump into 4th spot, behind Johnson, Hagan and Capps, but ahead of Beckman.

In the 4th round of qualifying, Del Worsham and Jack Beckman went head to head, and when Beckman’s Charger ran a 3.890, he beat Del and jumped into the top qualifying spot. Worsham ran a 3.896 to claim the second spot at that time, but when Ron Capps came out for the final funny car pairing of qualifying, his 3.886 put him atop the ladder.

Eliminations
In round 1 of eliminations, Capps, Hagan, Johnson and Beckman all won with their Dodge Charger funny cars, but so did Worsham, Hight, Pedregon and DeJoria. In round 2, Capps beat DeJoria, Tommy Johnson Jr beat Matt Hagan, Beckman beat Cruz Pedregon and Worsham beat Robert Hight.

This set up a final four shootout that included a head to head run between Jack Beckman and his Dodge Charger and Del Worsham and his Toyota Camry. This was literally a head to head run for the NHRA championship. Were Del to win, he would tie up the championship and if Beckman won, he would have a chance to take home another Wally and the 2015 funny car championship. Beckman had been quicker than Worsham in each of the first two rounds and Fast Jack had lane choice in the matchup with Del.

Beckman got off of the line first with a .055 reaction time to Worsham’s .086, but when he had to play with the throttle to maintain traction, the Toyota passed the Dodge and drove to victory. At that point, Del Worsham had tied up the 2015 NHRA Funny Car Championship.

In the other half of the final four, Tommy Johnson Jr beat Ron Capps to advance to the finals. In the finals, Del Worsham and his Camry fittingly beat one more Dodge Charger, handing Tommy Johnson Jr the final round defeat and literally racing his way to the championship.