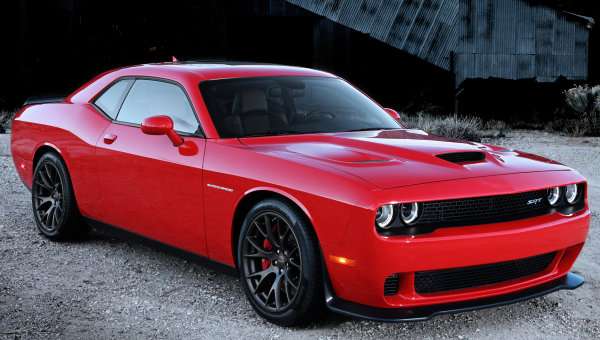 This morning, the Chrysler Group dropped the first official information on the long awaited Hellcat Hemi that will power the 2015 Dodge Challenger SRT – including the incredible news that the Hellcat will indeed pack more than 600 horsepower.
Advertisement

For months now, we have been talking about the Hellcat Hemi V8 that would power both the 2015 Dodge Challenger SRT and the 2016 Dodge Charger SRT. Until the release of the 2014 Chrysler Group 5-year plan a few weeks ago, there had been no official acknowledgement that the Hellcat Hemi existed. When those small images of the Hellcat Hemi appeared in the 5-year plan PDF, we knew that it was coming and we all expected that it would have more than 600 horsepower.

The Chrysler Group still hasn’t announced exactly how much power the new 6.2L supercharged Hellcat Hemi will make, but the company has promised that it will have “600 plus horsepower”.

The 2015 Dodge Challenger SRT Hellcat models make this 600+ horsepower with a 6.2L supercharged Hemi that is 91% new compared to the 6.4L Hemi currently in use. Atop this new Hemi sits a 2,380cc supercharger housing that uses a twin rotor setup to force 11.6psi into the 92mm throttle body to make this engine the most powerful V8 ever built for a production road car by the Chrysler Group. All of that power is then channeled through the buyer’s choice of a heavy duty 8-speed TorqueFlite automatic transmission or a 6-speed manual transmission that is borrowed from the SRT Viper.

"If ever there was an engine that does Detroit proud, this is it," says Bob Lee, Vice President and Head of Engine, Powertrain and Electrified Propulsion Systems Engineering – Chrysler Group LLC. "The supercharged 6.2-liter HEMI V-8 is beyond robust. With 91 percent new content compared with the standard 392 HEMI, it will shatter the expectations of SRT customers – and they are among the most demanding and knowledgeable powertrain buffs anywhere."

The 2015 Dodge Challenger SRT Hellcat features a collection of unique exterior appointments like special 20 inch wheels wrapped in high performance tires, supercharged badges on the fenders and the customary SRT badges on the front and rear of the car, the 2015 Challenger SRT models powered by the Hellcat Hemi wear a unique front fascia that improves downforce and helps feed the hungry supercharged V8 along with a unique hood that features a large front facing opening flanked by a pair of heat extraction vents.

Oh, I’m sure that the 2015 Challenger SRT with the 392 Hemi will also have a price tag much closer to the price of the current 2014 Challenger SRT while the Hellcat Hemi models will likely cost considerably more.

Production of the 2015 Dodge Challenger SRT Hellcat will begin during the third quarter of 2014 and – like the rest of the modern Challengers – the 600+ horsepower Hellcat Hemi models will be built at the Brampton Assembly Plant in Canada. The video below offers a bit of information on the new Hellcat Hemi, but more importantly, it also gives us a chance to hear the Hellcar roar in the 2015 Challenger SRT. Crank up your speakers and enjoy!

LARRY wrote on May 21, 2014 - 1:26pm Permalink
I'm a Dodge man and i was very disappointed that the 2015 challenger didn't have a engine that was around 600 hp or more available.Well Chev and Ford sport cars are pushing around 600 hp plus . I was seriously thinking to purchase a Chev but i rather stay with Dodge if possible. For the challenger I'm very happy that Dodge stayed close to the full size car and the outside look of the 70's and did a excellent job on the interior as well on the 2015 model.I hope that Dodge follows through with the Hellcat Hemi with premium engine parts and 600 hp or better. Dodge follows up on this i will purchase one.
rob schle wrote on July 3, 2014 - 4:36am Permalink
about time get higher hp 707 .. wow how much cost ??
Thomas Smith wrote on September 23, 2014 - 3:25pm Permalink
I want to know how much is the new Hellcat motor I want to buy the motor and trying to find out it coast I want to buy one and put it into my 05 dodge magnum I hope it fits in with no problems fitting in it
Kacper wrote on January 18, 2016 - 12:03pm Permalink
Awww. The car of my dreams. I calculated everything already. I must work for 40 years, day by day, don't eat and drink anything and live under the bridge to buy this one. Poland, so lovely country <3 Ohh I forgot about the gas, that V8 likes to eat, I would need to spent whole month salary to buy enough gas.