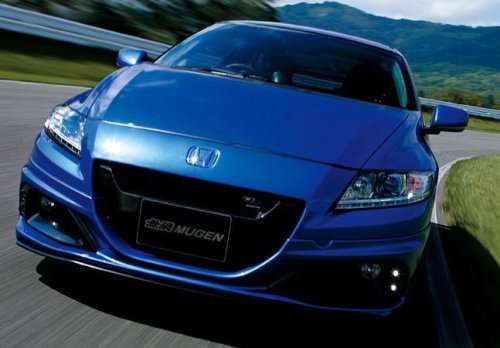 While the 2013 Honda CR-Z debuted at the Paris Motor Show with a bump in power, the tuning experts at Mugen have introduced their high performance take on this sporty little compact hybrid with a more power, improved handling and a very unique look inside and out – making for an eye-catching high performance hybrid.
Advertisement

The Honda CR-Z was designed to be a hybrid sport compact but many believe that there is more hybrid than sport. Honda has addressed this problem to some extent with the 2013 CR-Z but for those who still want more - that is all taken care of with the new Mugen RZ version of the 3-door hybrid hatch. Click here for a look at the standard production 2013 Honda CR-Z Hybrid.

The root of the 2013 Honda CR-Z Hybrid Mugen RZ is the same 1.5L gasoline engine found in the standard CR-Z hybrid hatchbacks but Mugen has added a supercharger package and a cat-back exhaust system that increases the engine output to 153 horsepower and 143lb-ft of torque. The 2013 CR-Z Mugen RZ features the same Integrated Motor Assist (IMA) system from the standard CR-Z hybrid that adds an additional 20 horsepower with the Plus Sport button.

Once the drivetrain was taken care of, the 2013 Honda CR-Z Hybrid Mugen RZ team turned their attention to the handling capacities – adding 5-way adjustable coilovers and a big brake package featuring 11.8” rotors clamped down on by high performance pads and calipers. These huge stoppers are tucked behind 17” forged aluminum wheels wrapped in Dunlop Direzza ZII high performance rubber.

Like all well-known Mugen high performance packages, the 2013 Honda CR-Z Hybrid Mugen RZ features a serious body kit package beginning with a new front fascia fitted with an adjustable lower splitter and LED lighting. There is also unique Mugen badging in the bold new grille. Unique, more aggressive side sills give the car a more slippery look along the sides with a dark front area that matches the dark wheels and out back, Mugen has added a diffuser along the bottom and a large adjust carbon fiber wing mounted high on the roofline. Finally, all of the body parts that are carbon fiber are painted Azure Blue Metallic with black trim here and there. While this new look might not be for everyone, Mugen has always made sure that their tuned vehicles had an exterior design that offered supreme aerodynamics combined with a very unique look – and the 2013 Honda CR-Z Hybrid Mugen RZ is no different.

There is some bad news with the 2013 Honda CR-Z Hybrid Mugen RZ. First, there will only be 300 of them built and they carry an MSRP of 4,494,000 Japanese Yen – that’s $57,438 in US Dollars with current conversion rates. That brings me to the other bad news…the Mugen RZ will only be available in Japan when it goes on sale on November 26th.

Click any of the thumbnails on the right for a closer look at the 2013 Honda CR-Z Hybrid Mugen RZ.