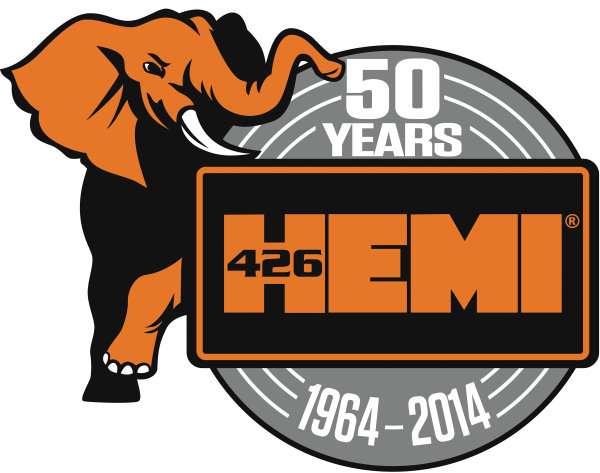 The Hemi V8 turns 50 years old in 2014 and there would be no better way to kick off the 50th year of the mighty Hemi than by introducing the Dodge Challenger’s Hellcat Hemi at the 2014 North American International Auto Show in Detroit.
Advertisement

The Chrysler Group announced today that 2014 brings about the 50th birthday of the fabled Gen II 426 Hemi V8. Having first been introduced back in 1964 under the hood of the then-new Dodge Charger and featured in an incredible list of some of the most powerful cars, trucks and SUVs in the history of the American auto industry, the Hemi overcame a disappearance in the 1980s and 1990s to return to its former glory in the likes of the modern Dodge Charger, Dodge Challenger, Dodge Durango, Jeep Grand Cherokee, Ram pickup and the Chrysler 300 - although its quite a bit smaller than the original 426. To celebrate the 50th anniversary of the Hemi V8, Chrysler introduced the Hemi 50th anniversary logo shown above along with a long list of Hemi branded Mopar apparel including shirts, jackets, watches, pens, coffee cups, hats, key chains, clocks, can cozies and much, much more – all of which you can check out on WearMopar.com.

“Mopar is proud to mark the 50th anniversary of the introduction of the Gen II 426 HEMI, a revolutionary engine that inspired a long line of quality products in our brand’s portfolio,” said Pietro Gorlier, President and CEO — Mopar, Chrysler Group LLC’s service, parts and customer-care brand. “The 426 HEMI is such a vital part of our heritage and a key ingredient in helping make Mopar what it is today. The success of the Race HEMI launched a unique brand of sought after muscle cars that had fans began to refer to as Mopars, and that is something we are very proud of.”

We can expect that at least some of this 50th anniversary Hemi stuff will be on display at the upcoming 2014 North American International Auto Show which opens next week in Detroit but you know what would draw more attention than a bunch of Hemi stuff in glass cases? Introducing the latest generation of the mighty Hemi. It is all but guaranteed that the Dodge Challenger will soon feature a supercharged Hemi codenamed the Hellcat and it is widely expected that this new Hemi will be the most powerful non-Viper street legal engine ever offered in a Chrysler Group vehicle…and that is a pretty impressive claim considering the incredible history of the Mopar performance world. Even if only on an engine stand with the 50th anniversary stuff in cases around the engine, the Hellcat Hemi would draw both Mopar lovers and general go-fast fans alike. Maybe I am just dreaming but it is hard to argue that the most powerful street Hemi ever built would serve as a fitting centerpiece for the 50th anniversary celebration at the Detroit Auto Show.

Of course, if would be even better if the 2014 NAIAS in Detroit brought us our first look at the next generation Dodge Challenger Concept which seems somewhat feasible considering that the current Challenger was introduced in concept form at the 2005 NAIAS but with Ralph Gilles hinting that the next generation Challenger would debut in New York – a simple introduction to the Hellcat Hemi would surely make some ripples in the American performance car segment. Here’s hoping.