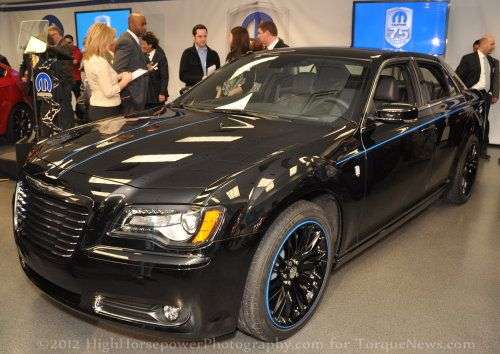 Introducing the Chrysler 300C based Mopar '12

This morning, the Chrysler Group’s Mopar division invited the media and a group of enthusiasts to visit their Performance Parts Lab in Centerline Michigan and the star attraction was the unveiling of the new Mopar ’12 – a Chrysler 300C that has been modified inside and out as the third member of the Mopar brand vehicle lineup.
Advertisement

The Chrysler 300C based Mopar ’12 follows the trends set by the Challenger based Mopar ’10 and the Charger based Mopar ’11, which begins with an all-black paint scheme applied to a model equipped with the 5.7L Hemi V8. This tried and true Hemi sends 363 horsepower to the rear wheels via a 5-speed automatic transmission mated to Chrysler’s AutoStick shift controls. The key performance modification made to the Mopar ’12 is the rear gearing, which receives a hefty 3.91 to 1 ratio in place of the standard 3.06 to 1. This gearing increase offers vastly improved acceleration over the non Mopar modified Chrysler 300C – allowing the Mopar ’12 to rip from 0-60 in the low 5 second range.

In order to help improve the handling of the Mopar ’12 Chrysler 300C, the Mopar engineers have installed a sportier suspension package with springs that are 42% stiffer in the front and 23% stiffer in the rear than the traditional Chrysler 300C. The Mopar ’12 also benefits from a specially tuned braking system with dual piston rotors up front and single piston units out back – with high performance brake pads for optimum high speed stopping power. Finally, the Mopar ’12 wears a set of P245/45R20 Goodyear Eagle F1 tires that help the handling, acceleration and stopping abilities of the limited edition, high performance luxury sedan.

The Mopar ’12 is the third edition of Mopar branded, limited edition Chrysler Group products and like the first two, the modified Chrysler 300C begins with a high gloss black finish. For the second year in a row, the Mopar branded vehicle sports blue stripes on the side of the car along with a pair of stripes running down the hood. This same bright blue striping is also found on the outer edge of the gloss black 20” aluminum wheels with a chrome Mopar logo center cap. Next, Mopar turned their attention to the front end of the Mopar ’12, adding a black chrome 7-bar grille, black chrome headlight/bumper trimming, and black headlight bezels to emphasize the sinister look of this luxury street brawler. Along with the blue striping that runs the length of the vehicle side, the Mopar ’12 wears unique 75th anniversary badging on both front fenders to help celebrate this incredible milestone for the Chrysler Group’s performance division.

Finally, the Mopar ’12 adds unique interior appointments to help it stand out from the non-Mopar Chrysler 300C. This begins with a set of Katzkin leather seats in the front with the Mopar logo on the seat back in blue with blue stitching on the black seats and more blue on the center inserts of the seats. In the back, the seats wear the same blue stitching and blue perforated center section but the back seats do without the Mopar logos. Mopar then adds branded doorsills in bright silver and a serialized plaque on the center console right next to the Mopar branded t-handle shifter.

The Mopar ’12 will be built alongside the rest of the Chrysler 300 models at the company’s Brampton, Ontario production facility and the of the 500 examples of the Mopar ’12 are expected to hit dealerships this summer. The Mopar ’12 carries an MSRP of $49,700, which includes the $825 destination fee but in addition to the gorgeous limited edition vehicle, each Mopar ‘12 buyer will get a personalized owners kit in a customized Mopar ’12 box. This kit includes a certificate with the VIN number, the date of manufacture and the serial number of that specific Mopar ’12 along with a sketch of the Mopar ’12 signed by the designer and a unique brochure talking up the unique features of these modified Chrysler 300C sedans.

Check out the gallery on the right for a closer look at the new Mopar ’12!