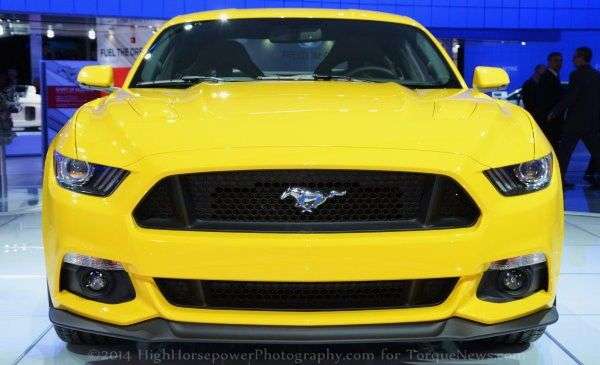 An Interesting Reminder on the 2015 Ford Mustang Styling

While the critics of the 2015 Ford Mustang redesign are crying foul over the fact that the front end is too European looking, we should all be reminded that the original Ford Mustang back in 1964 was designed to put an American spin on a European-like sports car.
Advertisement

Amidst a discussion on LinkedIn about one of our recent Mustang articles, one of the folks who commented made an interesting point that really hasn’t been mentioned much when discussing the 2015 Ford Mustang. “The original, 64 1/2, had European styling and was quite different from other cars on the road at the time in the US,” said Bruce A Sawicki.

The original designer of the Ford Mustang back in the 1960s made it quite clear that in developing the first concept and production Mustang, he tapped some of the most popular European sports cars of the time for inspiration. The 1964 Mustang really wasn’t all that much like any of the popular European sports cars, but it was also unlike anything that we had seen in the US. The first Ford Mustang introduced the American public to a smaller, low cost sports car that was vastly different than any of the previous American sports cars while European drivers had long enjoyed comparably small, sporty cars. The same was true of the original Chevrolet Corvette, although the Corvette didn’t offer the same affordability as the Mustang.

Over the years, the Ford Mustang has evolved a great deal from the original 1964 model and while the 2015 Mustang is much bigger, much more powerful and much more expensive – it is still distinctly the Mustang. Yes, the front end is unlike the previous model, but that has been the case in every major generational change since 1964. Critics hate the elongated headlights, stating that they are too much like the Taurus and Fusion, but the round headlights of the 2014 models hadn’t been around since the 1970s before being introduced for 2005…and the Mustang did just fine in sales from 1979 through 2004.

The 2015 Mustang Headlights Make All the Difference
Realistically, it is a huge stretch to say that the 2015 Ford Mustang has a European design, but that has been one of the main negative critiques of the new face. If anything, the headlights can be compared to a handful of European models, but other than the night lighting - there isn’t a massive change from the previous generation relative to the changes between past generations. Other than those headlights, you can directly relate every aspect of exterior design of the 2015 Mustang with similar features on the 2014 model – from front to back.

The problem is that in many cases, features of American cars follow the technology of foreign automakers so when companies like Audi or Aston Martin came out with the high tech headlight look; automakers from around the world were quick to adopt that look as well. The 2015 Mustang features a headlight design that has become very popular across the global auto industry, but aside from that new face this new Mustang is unmistakably American and unmistakably Mustang.

In the long run, the 2015 Ford Mustang is still everything that the past models have been with tons of power, a big, wide stance that screams American muscle and a lineup of powerful engines that make the Mustang one of the best performing nameplates in the world. Adding a headlight design that has become very popular around the world is a problem for some, but it isn’t going to hurt the sales of the next generation Mustang as the positive aspects of the new model far outweigh the “downside” of the front end – especially considering that so many people don’t have a problem with the new front end. Cars have to change over time to last as long as the Ford Mustang so as the mighty Mustang has done over the past 50 years, the new model gently changes with the industry but it does so in a way that preserves everything that makes the Mustang so awesome.

a man wrote on June 9, 2014 - 5:06pm Permalink
Everything this article states is true...I like the look of it actually However, I'm still not going to buy it if it weighs more than the last one though (hope you heard that Ford)
ainterne wrote on June 9, 2014 - 10:18pm Permalink
Yes, good points. Ford has made a very clever decision to see in Europe and ROW. Prior to the 2015 they would never sell because of the gas prices and engine size (tax reasons) in Europe.. Now people can purchase the EcoBoost and drive a Mustang that don't kill the pocket book in Europe, they will sell like hotcakes. The headlight shape will have no effect on sales....It will sell and sell well... Selling more cars can't be a bad thing for a US company in today's economy....Everyone wins and that doesn't happen much anymore. Ford are happy and Customers are happy.... With that all said,I own a 2014 Boss 302 and quite honestly while I can never drive my car and not get a nod, hoot, wave from someone noticing my car, I prefer the 2015 and think the front end is an improvement.
Melissa wrote on June 10, 2014 - 3:06pm Permalink
I'm sad Ford is trying to satisfy the European market. It's an American sports car for pete's sake. I think they've made a mistake with this design, the front end doesn't look like a sports car at all. It reminds me of the Fusion and I simply think "old man" and "Mom that doesn't want a minivan" for those vehicles. I think Chevrolet, on the other hand, has done an amazing job styling the Corvette to look good front to back. Just sitting on the lot the Corvette looks fast and mean. The new Mustang looks big, bulky and as if someone designed the front and someone else the back. I don't personally like the way the tail lights are stacked. It also looks too plain. I guess to each their own. I didn't like the 70s models either.
Don wrote on June 10, 2014 - 4:21pm Permalink
I love the new look. I've seen this car in person twice, and both time I fell in love again. I ordered my ruby red 2015 Ecoboost on 5/20 and can't wait till it arrives in about 113 days or so.
ainterne wrote on June 10, 2014 - 8:13pm Permalink
Congratulations Don. Great choice. I hope you enjoy it. Let's think. Jaguar, AC Cobra, Ferrari, Lamborghini, Aston Martin, Rolls Royce, Bentley, Porsche, BMW, Audi, Bugatti Veyron, McLaren, Pagani Zonda,Saleen, Koenigsegg, all those terrible European styled cars. The 2015 Mustang is starting to take its style from the Aston Martin in the front. But, no no... lets go for a Chevrolet designed by a bloke called Bob in Ohio....???? Chevrolet? Are you kidding....It's a cheap and plastic car.... Put your finger on the bodywork and consider yourself lucky if it doesn't go through. Good job Don....