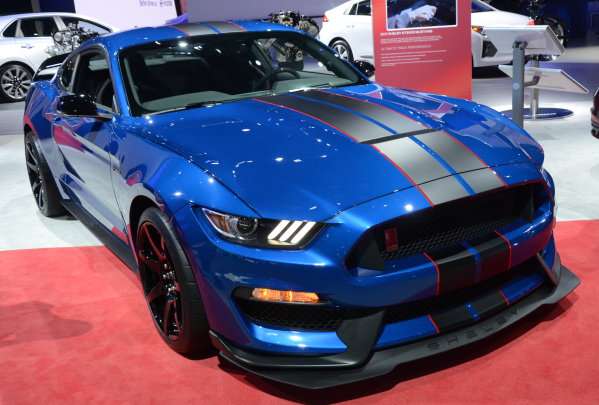 While we at TorqueNews still haven’t gotten any information from Ford Motor Company to prove that there is definitely a new Shelby GT500 Mustang coming in the near future, a handful of industry insiders believe that the new super-Stang will be an even more powerful road racer, designed to battle the Camaro ZL1 1LE – not the Dodge Challenger SRT Hellcat.
Advertisement

Over the course of the past few months, I have spoken with representatives of several automakers (who wish to remain nameless in this discussion) regarding the rumors of a new Shelby GT500 Mustang and in every case, the belief is that the next high performance pony car will essentially be a more powerful, more capable version of the current Shelby GT350R (shown above). Based on discussions that they have had with other industry insiders, virtually all of the industry professionals expect that the next GT500 Mustang will an all-around performance car designed to go toe-to-toe with the Chevrolet Camaro ZL1 – not the more drag-ready Dodge Challenger SRT Hellcat.

When Ford introduced the previous generation Shelby GT500 Mustang for the 2013 model year, it was the most powerful muscle car the world had ever seen while also being the most powerful American production car ever. That Mustang was powered by a supercharged 5.8L V8, delivering 662 horsepower and 631lb-ft of torque, and while that GT500 was a fine-handling car - a drag strip is the track where you are most likely to see that Shelby Mustang shine. That Mustang went out of production after the 2014 model year, so when the Dodge Challenger SRT Hellcat was introduced for 2015, it was effectively unseating the 2013-2014 GT500 Mustang as the most powerful and quickest muscle car.

Shelby GT500 Mustang –vs- Camaro ZL1 1LE
If these discussions with industry representatives prove to be accurate, the next Ford Shelby GT500 Mustang is being engineered to beat the new Chevrolet Camaro ZL1 1LE on every level. When the new (current) GT350R was introduced, it was the most road course capable car in the muscle car segment, but since the 650hp Camaro ZL1 1LE has arrived – the GT350R Mustang is no longer the top dog when it comes to road course domination.

This means that the Ford Mustang isn’t the quickest factory drag car or the quickest factory road race car, and you have to figure that the company will look to grab one of those claims with the next super-Stang. According to these industry experts, the GT500 will be based on the GT350R, with similar brakes, similar body work and a similar high tech suspension system. The difference is that the GT500 should (in theory) have far more power than the 526hp and 429lb-ft of torque offered by the GT350R’s 5.2L flat plane V8.

It is expected that the next GT500 will have lots more power, perhaps less weight through use of advanced composites and some big, beefy tires. Spy shots floating around the internet show a new Shelby Mustang test mule riding on 20 inch wheels all around, wrapped in 305mm-wide Michelin road racing rubber. The Mustangs in those spy shots appear to be pretty similar to the GT350 model under the tight camo, with the exception of the bigger wheels and tires, which would seem to prove that there is either a GT350-based GT500 on the way – or Ford is working on an even spicier GT350.

If my discussions with these industry experts suggests that there is a Ford Shelby GT500 Mustang on the way and when it arrives, it will be able to go head to head with the Camaro ZL1 1LE on any race track with a good chance of winning – but we shouldn’t expect the 750hp beast which has been rumored in the past. In short, the Mustang team might be focusing on the ZL1 with the LT4, so they only need to beat 650hp, not 707 or 840hp, so while the next GT500 might have more than the 662hp from the 2014 models – we might not see the huge numbers needed to compete with the Dodge Challenger on the dyno or the drag strip.

Lane Fast wrote on May 4, 2017 - 7:53pm Permalink
Total fail. Ford is like the Congressional Republicans ... they don't know how to win anymore. Anything less than 800 h.p. in the new GT500 will be a fail.
Matt wrote on May 27, 2017 - 9:28am Permalink
Lane, if you want to get political, a quick Google would have told you the Republicans control the majority in both the House and the Senate.... as well as the Presidency and Supreme court.Total fail on your part. Clearly the new GT500 is going to go for the throats of the Hellcat and ZL1, it won't be hard for Ford to do this with 2 turbos while the others are supercharged.