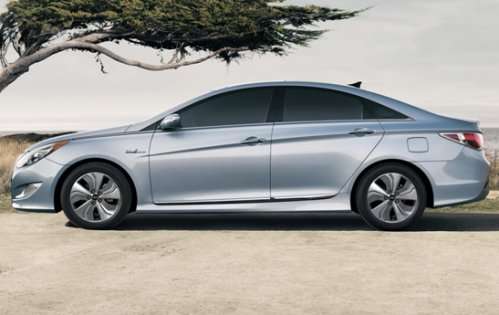 The Hyundai Sonata Hybrid gets more MPGs, Limited trimline and a lower price for 2013

Hyundai has just announced the pricing and fuel economy figures for the 2013 Sonata Hybrid and while it comes as no surprise to learn that the new Sonata Hybrid is more efficient than the 2012 model year vehicles – it comes as a big surprise that the 2013 models are less expensive than those currently at dealerships around the country.
Advertisement

The highly efficient segment in which the 2013 Hyundai Sonata Hybrid competes is one where the competitors are always trying to edge ahead of each other so it is almost expected that the new Sonata Hybrid for 2013 offers better fuel economy than the outgoing 2012 model year vehicles. It also comes as no surprise for Hyundai to add a new Limited trimline option for those who want more luxury out of their hybrid sedan. What is surprising is that the starting price of the 2013 Hyundai Sonata Hybrid is $200 less than the current Sonata Hybrid while also being around $500 less than the Toyota Camry Hybrid

Hyundai didn’t change much on the 2013 Sonata Hybrid in terms of the engine or transmission as the midsized sedan is powered by the same 2.4L Atkinson 4-cylinder engine mated to a 6-speed automatic transmission but to offer the improved fuel economy measures – the company heavily revamped the electrical assist portion of the drivetrain.

First, the lithium ion battery pack of the 2013 Hyundai Sonata Hybrid has an output of 47kW compared to just 34kW for 2012 but more importantly, this upgraded battery pack is smaller and lighter than the battery setup of the 2012 model year Sonata Hybrid. This smaller battery cuts about 4.6 pounds from the car but it also allows for roughly 12% more trunk space. While no electric-only driving range has been specified, Hyundai claims that this new battery pack will help the 2013 Sonata Hybrid to make better and more frequent use of the all electric mode. Best of all, the Sonata Hybrid is capable of reaching a top speed of 75 miles per hour where most other hybrid models won’t let you get anywhere near a reasonable speed limit. As was the case for the 2012 model year Hybrids, the 2013 Sonata Hybrid comes with a lifetime battery warranty.

Next, the 2013 Hyundai Sonata Hybrid features an improved electric drive motor that offers more torque, thus reducing the need for the gasoline engine to fire up and power the vehicle when the Sonata is running in the electric only mode. Many hybrids will not let you accelerate at a reasonable pace when in an all-electric drive mode but the new 35kW motor is expected to help provide a more powerful driving experience without the use of the gasoline engine.

Finally, Hyundai has equipped the 2013 Sonata Hybrid with a new Hybrid Starter Generator (HSG) with 10.5kW (up from 8.5) of capacity to help provide a smoother transition between the drive modes as power is needed. This stronger HSG allows the new Sonata Hybrid to start the gasoline engine and apply that power to the system more quickly and less noticeably.

While the exterior of the 2013 Hyundai Sonata Hybrid remains identical to the current models, the Korean automaker points out that with a coefficient of drag of just 0.24, there isn’t much need for exterior changes. After all, that drag figure indicates that the Sonata Hybrid is more aerodynamic than the Porsche 911 GT2 RS and the Nissan GT-R which has drag coefficients of 0.34 and 0.27 respectively.

The base price of the 2013 Hyundai Sonata Hybrid is $25,650 (not including the $795 destination fee) which represents a drop in price of $200 from the 2012 model year. This new price also makes the 2013 Sonata Hybrid roughly $500 less than the Toyota Camry Hybrid starting price and a whopping $1,550 less than the new Ford Fusion Hybrid – making the Sonata Hybrid one of the most inexpensive hybrids available in the US.

In addition to the improved fuel economy and the new, low price, the 2013 Hyundai Sonata Hybrid will also feature a new Limited trimline that adds lots of luxury goodies throughout the cabin. This includes leather front and rear seats, a leather wrapped steering wheel and shifter, heated rear seats (heated front seats are standard on Sonata Hybrid), a power driver’s seat, a navigation system, a rear backup camera, a high end Infinity sound system, an auto dimming mirror and “premium door sill plates”. The Sonata Hybrid Limited also gets a set of classier 17” Eco-spoke lightweight alloy wheels and the total price for this high end Sonata is $30,550. For an extra grand, buyers can also opt for a sunroof package that adds a huge panoramic glass sunroof and gloss black side mirrors.