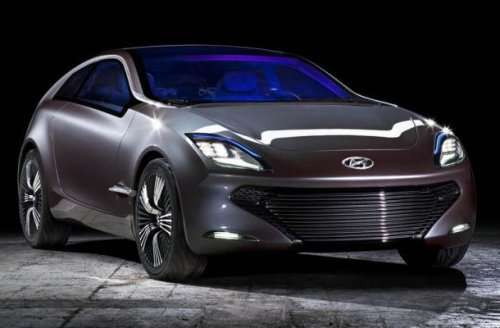 The Hyundai i-oniq displays their electric technology in Geneva

We got our first look at the unique concept car shown on the right last week when the first image was leaked but with the opening of the 2012 Geneva Motor Show – we have a better looking at the new Hyundai i-oniq as well as technical information on the sleek electric hybrid.
Advertisement

The Hyundai i-oniq concept is an interesting machine, with a long bonnet, a sleek hatchback design and a greenhouse that allows for lots of headroom – even for rear passengers. The body lines, which are part of Hyundai’s fluidic sculpture, give the i-oniq a very high riding look for a compact hatchback but overall it makes for a very striking concept car. Those concept car bloodlines are accentuated by the massive gullwing doors that offer access to both front and rear riders, which aren’t likely to show up in a production Hyundai in the near future.

The new Hyundai i-oniq concept is powered by a series hybrid drivetrain featuring a 1.0L 3-cylinder gasoline engine and a 100 horsepower electric drive motor mated to a lithium ion battery pack. Being a series hybrid, the 60 horsepower gasoline engine doesn’t send any power to the wheels but instead, the 1.0L engine sends power to the 55kW generator system that ensures that the lithium ion battery always has juice to turn the wheels. Driving strictly on battery power, Hyundai claims that the i-oniq will go around 74 miles but with the assistance of the range extending gasoline engine – the i-oniq has a total range of 435 miles. This drivetrain also affords the sleek hatchback a top speed of 90 miles per hour.

Inside, the Hyundai i-oniq concept stresses the “concept” part, with a high tech, futuristic interior layout featuring a steering wheel that looks like it came out of a race car. The two-piece steering wheel is connected with a central touch screen, with the entire dash literally flowing to meet the bright gauge cluster. Those flowing lines continue around the driver and down the middle of the car to form the center console.

While the overall design of the Hyundai i-oniq looks fairly production friendly, we aren’t likely to see the vehicle shown in the images above in dealerships any time soon. However, we could see future Hyundai vehicles sporting the exterior curves of the i-oniq concept and more importantly – this concept shows that the Korean automaker has a series hybrid in their labs. This means that in the near future, we could see a Hyundai vehicle with an electric drivetrain and a range extending gasoline engine. Right now, the bestselling series hybrid in the American auto industry is the Chevrolet Volt and the main issue with the Volt for many consumers is the $40k+ price tag. Depending on how Hyundai priced a future electric model with a range extending engine – they could turn the heat up on the Volt.

Check out our gallery on the right for a better look at the sporty new Hyundai i-oniq concept and stay tuned to TorqueNews for more from the 2012 Geneva Motor Show!