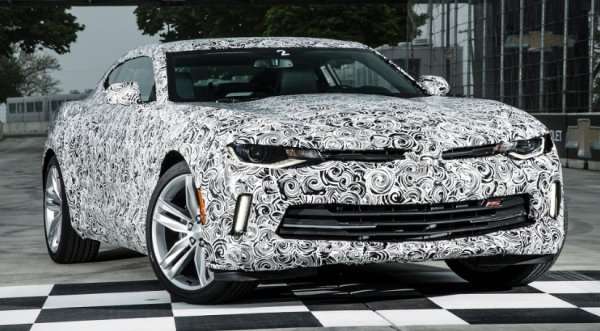 How the Turbo Camaro Could Beat the EcoBoost Mustang

We have been so focused on talking about the real world specifications of the 2016 Chevrolet Camaro that we didn’t look at one of the most important aspects of a new vehicle – and a lower purchase price could play a big part in the new turbocharged 4-cylinder Camaro RS challenging the more powerful EcoBoost Mustang.
Advertisement

Yesterday, we looked at the possible weight ratings for the 2016 Chevrolet Camaro RS with the new turbocharged 4-cylinder engine and how a big weight reduction from 2015 to 2016 could help the new turbo Camaro compete with the new EcoBoost Mustang. However, when we focus more on the sales battle than an actual head to head race, pricing could play a bigger role than overall performance and – based on the early information – it appears as though the turbo-4 will be the entry level engine for the 2016 Camaro RS, where the EcoBoost engine for the 2015 Mustang is a $1,500 upgrade.

Base Pricing – Mustang VS Camaro
If you build a 2015 Mustang and a 2015 Camaro on the Ford.com and Chevrolet.com websites, you will find that both base model V6 cars carry an MSRP of $24,700 including the destination fee. Those prices are for the new 2015 Mustang V6 fastback with a manual transmission and the “old” 2015 Camaro 1LS with the V6 engine and the manual transmission. Opting up to the 2015 Ford Mustang EcoBoost fastback with the manual transmission lifts the price to $26,200, making the turbocharged 2.3L mill with 310 horsepower and 320lb-ft of torque a $1,500 option.

While we don’t know any pricing numbers for the 2016 Chevrolet Camaro, we can expect the overall price range to be in the same basic range as the 2015 Ford Mustang, so there shouldn’t be a big price hike for the next generation Camaro. The thing is, with the turbocharged 2.0L 4-cylinder mill serving as the base model engine below the 3.6L V6, it will likely cost less than the V6 – leaving us to wonder how the pricing will be laid out for the 2016 Camaro.

Possible 2016 Camaro Pricing
While we don’t have any pricing for the 2016 Chevrolet Camaro, it seems as though the turbo 4 will cost less than the 2016 V6 Camaro in one of two scenarios.

First, the 2016 V6 Camaro could be priced similarly to the V6 Mustang with the turbo 4 being below that price, which would make the turbocharged 4-cylinder Camaro the least expensive option in the muscle car segment. Basically, the pricing schedule for the 2016 Camaro V6 and SS would be relatively similar to the current prices, but the new turbo-4 would enter below any other models…and below any of the 2015 Ford Mustang packages.

Second, the 2016 Camaro entry pricing would remain in the same range, but rather than the V6 engine, base level Camaro buyers will get the 2.0L turbocharged engine. This would make the 3.6L V6 an upgrade engine option, which would allow the company to effectively shift the pricing range upwards, with the new V6 costing slightly more than the 2015 Camaro V6, while the turbo-4 would satisfy the needs of those new Camaro buyers who want to spend the least at the dealership and at the pump.
If Nothing Else, Except Little Increase

Regardless of how the pricing schedule of the 2016 Chevrolet Camaro is laid out, I believe strongly that we will see very minimal price increases with the new models. While a new generation performance car generally comes with a slight bump in pricing, a slight bump across the board will make the 2016 Camaro more expensive than the new Mustang across the board, with the only real advantage coming when you compare the prices of the two turbocharged 4-cylinder models. Being more expensive in almost every way could hurt Camaro sales, so I would expect only a minimal increase for the new models, as GM looks to maintain the competitive pricing with the new Mustang.

Toyota's First EV Will Have a Name of BZ: Toyota BZ
First Videos From Inside The Boring Company's Las Vegas Loop
END_OF_DOCUMENT_TOKEN_TO_BE_REPLACED