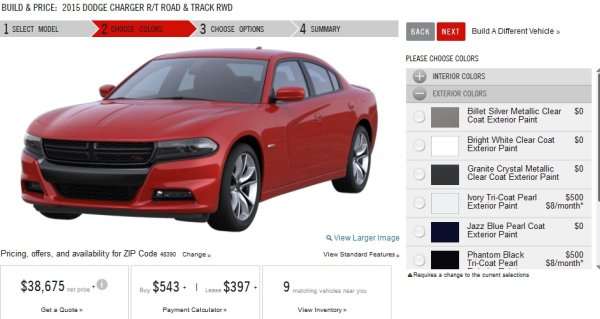 How I Would Build the Perfect 2015 Dodger Charger Online

The configurator tool for the 2015 Dodge Charger has gone live on Dodge.com and today I take a look at the options and costs that make for what I believe to be the best bargain in the current lineup – one which comes loaded to the hilt and packs 370 horsepower for just over $40,000.
Advertisement

I should start by pointing out that, right now, the 2015 Dodge Charger configurator does not include the Scat Pack, the SRT 392 or the SRT Hellcat trimlines. However, with the SE, SXT, R/T and R/T Road & Track trimlines, Dodge is currently allowing buyers to select from what will most certainly be the highest volume models for 2015.

The highest volume trimlines for the 2015 Dodge Charger will likely be the SXT and R/T models, with those buyers who want the looks and performance opting for the Hemi powered R/T. I am among those buyers who would want Hemi power, but with the Road & Track model starting just $3,000 over the R/T, I would most certainly pick the R/T Road & Track model.

Building the 2015 Dodge Charger R/T Road & Track
The 2015 Dodge Charger R/T Road & Track starts at $36,990 with destination and that price includes a long list of standard features like heated/cooled Nappa leather performance seats, the Dodge Performance Pages timing system, unique 20 inch wheels, the Super Track Pak, three-mode stability control, heavy duty disc brakes, sport suspension and R/T heritage badges. Just the list of features above are well worth the $3,000 upcharge over the standard Charger R/T so in my opinion – this trimline is a no-brainer right now.

The 2015 Charger R/T Road & Track is offered in 9 exterior colors, but none of them look as good on this new sport sedan as TorRed. Also, you can match the bright red exterior with a two-tone black and ruby red interior package that is a real showstopper. I have driven a 2015 Charger R/T with this color combination and it is a real thing of beauty.

In terms of options and option packages for the 2015 Dodge Charger R/T, there are several that work together to add a big dose of luxury technology for not a whole lot of money. The Beats Audio Group is very impressive for $995, the Navigation/Back up Group for $995 is a must-have in this day and age and the $1,195 power sunroof has become a feature that I enjoy. As much as I love the look of the black roof option on the red Charger, I wouldn’t pay $1,500 to get the parts of the roof that are not sunroof painted black from the factory. I like the front fascia center section in black, but for those who do not like it, Dodge will soon have a body color option for those who want the area between the two grille openings matching the rest of the car.

When you add in the options mentioned above, you have a 370 horsepower Dodge Charger R/T Road & Track that leaves you asking for very little in terms of style, comfort or technology. From the heated/cooler Nappa leather seats in black and red to the high end infotainment system with the Dodge Performance Pages, this Charger serves as a great daily driver while also packing the power to provide a whole lot of fun – all for just $40,175.

More Value Coming with the Scat Pack
While the 2015 Dodge Charger R/T Road & Track is currently the top of the line Mopar muscle sedan, the lineup will soon be joined by three far more powerful models including the R/T Scat Pack, the SRT 392 and – of course – the SRT Hellcat. Those buyers who want the most bang for the buck will want to check out the R/T Scat Pack, which takes the R/T and replaces the 5.7L Hemi with the 6.4L SRT Hemi with 485 horsepower on tap. This model will go on sale in early 2015, but for those 2015 Charger lovers who demand big performance now, dealerships are currently taking orders for the SRT 392 package. Unfortunately, the configurator tool doesn’t include the SRT 392 package yet, but when it finally fires up – you can be sure to read about it here at TorqueNews.com.

Click here to head over to Dodge.com to build your 2015 Dodge Charger!