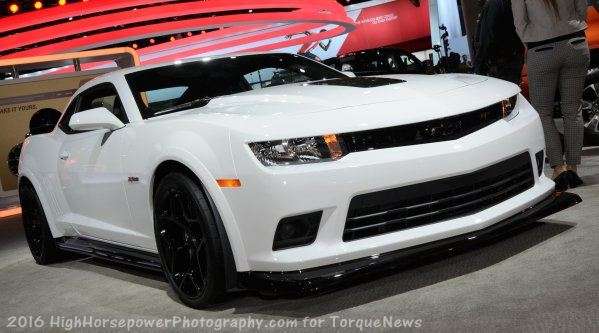 The 2017 Chevrolet Camaro ZL1 has just been introduced in the flesh at the New York Auto Show, but we can still expect an even hotter 6th gen Camaro in the near future – presumably being the next generation Z/28.
Advertisement

There have long been rumors that the 6th gen Chevrolet Camaro lineup would eventually follow the same trimline layout as the previous generation, with the base V6 and SS V8 being joined by a COPO Camaro, a Camaro ZL1 and a Camaro Z/28. The new COPO was introduced late last year at SEMA and the new Camaro ZL1 formally met the world this past weekend in New York, but there have been mixed rumors on a CamaroSix Z/28.

Some people insisted that the 2017 Camaro ZL1 is a complete enough vehicle that a new Z/28 wont be necessary while others point out that the newest ZL1 still leaves plenty of space for weight reduction. Fortunately, the crew at Autoblog recently caught some pictures of a new Camaro test mule that was carefully covered in camo, but the gigantic rear wing was unmistakable.

This mysterious Camaro test mule has a bigger wing than anything available on any 2016 Camaro or even the 2017 ZL1, and it seems that only one kind of muscle car would need a rear wing this big. Only a car made for serious road racing could use a wing like this. A car like the next generation Camaro Z/28.

What Might the Z/28 Be?
Now that we know that the Camaro ZL1 is back in very similar form to the 5th generation ZL1, with a supercharged V8, big brakes, the magnetic ride control system and the buyer’s choice of a coupe or convertible. The new Camaro ZL1 is a smaller, lighter and more powerful example of the previous Camaro ZL1, so if the Z/28 was to return, I would expect that it will be a lighter, more powerful version of the previous car. It will surely have the highest performance suspension setup available on a Corvette ever, along with a monster braking system and a lightweight body with the best aerodynamics possible.

The problem is that the 5th gen Camaro Z/28 used the LS7 V8 from the Corvette Z06. The new Z06 uses the new LT4 and since the end of the 5th gen Camaro production, no car in the GM lineup has used the LS7. It seems very unlikely that GM would continue to use this “old” engine architecture, so they would have to either use some variation of the LT1 or LT4 – or the company would have to come up with a new engine for the next gen Camaro Z/28. It seems likely that GM would go with a naturally aspirated engine in order to save weight on the next Camaro Z/28, but that would force the company to use the LT1 or come up with a new LT-series variation.

We talked almost three years about how General Motors had trademarked the engine names LT4, LT5, LTX and L88, and we know now that LT4 was for the new Corvette Z06, Cadillac CTS-V and Camaro ZL1 engine. The LT5 name was previously used on the high performance C4 Corvette ZR1 and L88 name was used for classic high performance Corvettes, so it seems more likely that one of those engines would debut in a Corvette (as most GM V8s do) before making a debut in the next gen Camaro Z/28.

Unfortunately, with the 2017 Camaro ZL1 just breaking cover this weekend and due in dealerships later this year, it could be a while before we get the first official information on the next generation Camaro Z/28. However, when it does arrive, should it be as extreme as the car in the recent spyshots – it could offer performance like we have never seen from any American muscle car on a road course.

Jaded wrote on May 23, 2016 - 4:38am Permalink
LT7S to be used in the upcoming C7 ZR1, and Gen 6 Z/28. Supercharged GenV V8, with 7.0l/427cid, featuring direct injection, vvt, and active fuel management/cylinder shut down technology. Power output of 747hp, 850 ft/lb torque. Wait and see.
Steven l. Mueller wrote on May 31, 2016 - 12:33pm Permalink
The supposed 747 HP in the z28. Is this to the crank or rear wheels.
Dirk Gently wrote on June 11, 2016 - 12:43am Permalink
It would be SAE net HP, so at the crank likely a little less than 700 to wheels. I somewhat doubt they would make it a 7.0L though if it's boosted. If it's NA it's not not going to make anything close 747 hp. The LT 4 currently in the Z06 however can easily make that power with a bigger supercharger, the stock internal have plenty of headroom. Now they may make a new 7.0L off the LT engine that is NA, but it's likely to be around 550hp. The heads start to limit the power around there. The camo test car believed to be the new Z\28 didn't sound like it had a turbo or supercharged engine. There is a video on youtube of it, it has a huge wing on it. In one video they crash it.
Andy baginski wrote on December 5, 2016 - 4:51pm Permalink
Rumor has it Chevy is to come out with the old tried and true 396 Cubed motor. Pushing out 808HP. I guess an attempt to one-up the Hellcat.