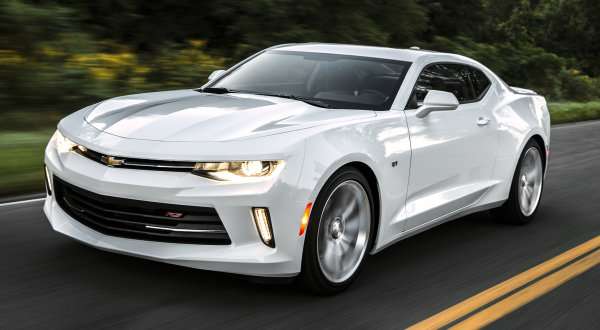 The folks at Hod Rod have published their first full review of the 2016 Chevrolet Camaro SS and in addition to putting more than 3,000 road miles on two different new GM muscle cars, the team also hit the dyno and the drag strip – with impressive numbers in both places.
Advertisement

Earlier this week, we reported that the folks at Hennessey found that the 2016 Chevrolet Camaro SS with the manual transmission was considerably more powerful than the 2014 Chevrolet Corvette Stingray with the same engine. This was surprising, considering that the Corvette has nearly identical power ratings to the new Camaro SS, both of which have the LT1 V8. Based on Hot Rod Magazine’s first review of the new Camaro SS, the real wheel horsepower figures are a bit more reasonable while the quarter mile times for the new 455 horsepower muscle car are even quicker than most people had expected.

Hot Rod Hits the Dyno
First up, Hot Rod Magazine took the 2016 Chevrolet Camaro 1SS with the 6-speed manual transmission to a dyno shop for a quick test. This car was equipped with the dual mode performance exhaust system and on the rollers, the new Camaro laid down 405.2 horsepower and 405.4lb-ft of torque at the rear wheels. That is a big difference from the 431 horsepower and 427lb-ft of torque that Hennessey got from a similarly equipped 6th gen Camaro.

2016 Camaro at the Track
As part of their 3,000 mile drive, the team from Hot Rod hit the dragstrip with two 2016 Camaro coupes. Along with the same 1SS Camaro that was used for dyno testing, Hot Rod had a Camaro 2SS with the 8-speed automatic transmission and helping the Hot Rod team get the most from these two new muscle cars was Hot Rod Drag Week Champ Jeff Lutz. Lutz drives one of the quickest street cars in the world, so he is a guy who knows how to get down the quarter mile.

General Motors expects that the 2016 Camaro SS with the automatic transmission will run in the 12.30s while the new V8 Camaro with the 6-speed manual will run 12.50s.

In other words, in the hands of an experienced, skilled driver, the 2016 Camaro SS will most certainly get down the track faster than GM’s expected times and once owners start getting seat time and stickier tires – we will surely see new Camaros in the 11 second range very soon.

Click here to head over to see the entire 2016 Camaro SS write-up from the folks at Hot Rod Magazine!