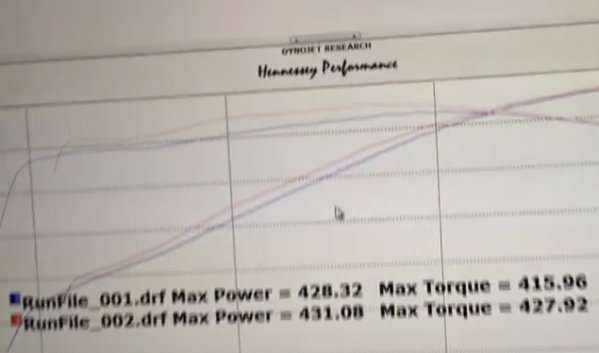 The tuning experts at Hennessey Performance have gotten their hands on a 2016 Chevrolet Camaro SS for some baseline testing and surprisingly, the new LT1 Camaro made more power than the 2014 Corvette Stingray with the same engine sporting a higher stock rating.
Advertisement

Hennessey Tests the 2016 Camaro
Hennessey Performance is likely preparing a long list of high performance accessories for the 2016 Chevrolet Camaro SS, but like all of their builds – they began their 2016 Camaro build with a baseline dyno test to see how much the car puts to the ground in factory stock form. We can see that this Camaro SS has the quad tips of the performance exhaust and we know that it has the 6-speed manual transmission mated to the 455hp LT1 V8.

On the Hennessey dyno, this bright red 6th gen Camaro SS laid down a stunning figure of 431 horsepower. Provided that this number is backed up by others, the 2016 Camaro SS is heavily underrated from the factory, since losing just 24 horsepower from the crankshaft to the wheels would make the new Camaro the most efficient rear wheel drive car ever – losing only around 5% of the power through the transmission, driveshaft and rear differential.

More Power than the Corvette
While it is impressive that the 2016 Camaro SS makes 431 rear wheel horsepower, it is just as impressive that it makes significantly more power than the stock 2014 Corvette Stingray. The Stingray is rated similarly, with a touch more torque, but when Hennessey tested the stock 2014 Corvette, they found that it only made around 400-410 horsepower with the various transmissions. Of course, none of those Corvettes had the 6-speed manual transmission of the 2016 Camaro SS, but that shouldn’t account for such a huge difference in power.

While there is a chance that the 2016 Chevrolet Camaro SS puts slightly more power to the rear wheels than the Corvette Stingray through the 6-speed transmission, it definitely seems odd that the Camaro is underrated by a more significant margin than the mighty Corvette. Right now, it looks as though a stock Camaro SS has around 30 more rear wheel horsepower than the new Corvette with the same transmission, making the Camaro an even bigger bargain in the performance car world.

Should the Hennessey dyno run for the 2016 Camaro SS be accurate, the figure of 455 is well below the actual figure and that is the kind of feature that can help draw new customers to the brand. At 455hp, the Camaro is advertised as having 20 more horsepower than the 2016 Mustang GT, but based on the dyno numbers, the Camaro has a much bigger power advantage over the cross-town rival.