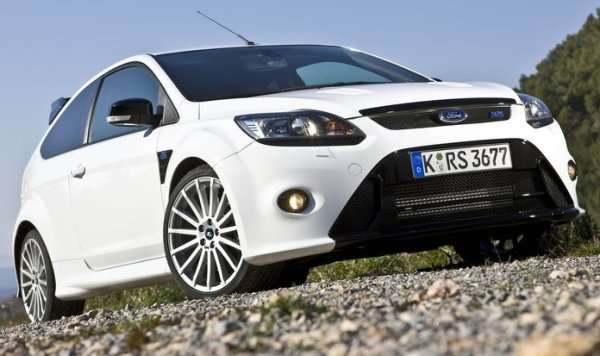 High Performance Focus RS Confirmed for the US, Possibly with Mustang Power

Ford Motor Company announced this morning that the high performance Ford Focus RS will soon arrive in the US market and while it is unofficial, it is widely rumored that the Focus RS will be powered by the 2.3L EcoBoost engine from the 2015 Mustang.
Advertisement

For ages, the Focus RS has been the ultimate in Ford hot hatch performance, serving as the forbidden fruit for those folks who dreamed of the rally bred, turbocharged Focus. While American hot hatch fans were excited to get the Focus ST and the Fiesta ST, neither of those models offered the level of performance as the Focus RS so sport compact lovers in the US were left pleading for the hotter RS package. Well, those pleas have been heard and answered favorably – as the Ford Focus RS is finally headed to the US market.

The Focus RS Goes Global
Technically, the big news today wasn’t that the Ford Focus RS will be sold in the US, as the announcement was that the Focus RS was becoming Ford’s newest global performance vehicle. Like the 2015 Mustang, the upcoming Focus RS will be marketed in a wide variety of markets around the world, which most notably includes the United States. Europeans are finally getting a right hand drive version of the Ford Mustang in their local dealerships and American are finally getting their hands on the hottest of the small Ford products.

It seems like a very fair trade to me, while also being a win-win for Ford in terms of both Focus RS and Mustang sales. The global approach has worked for a variety of other non-performance vehicles, so it only makes sense for the Motor Company to spread their most popular performance models to all of the markets where there is a demand for those products.

What to Expect from the Focus RS
On the outside, the new Ford Focus RS headed to the US should have some aggressive design cues that should help it stand out from the rest of the Focus lineup. Think about something that is fundamentally similar to the Focus ST, but even more aggressive. On the inside, the Focus RS will almost certainly have Recaro race seats up front with a rear bench seat that has a similar race-inspired design…again, similarly to the current Focus ST.

Where the Ford Focus RS will differ from the Focus ST the most is in the level of available performance. The ST is powered by a 2.0L EcoBoost 4-cylinder that delivers 252 horsepower and 270lb-ft of torque, making it one wicked quick little hatchback. The last Ford Focus RS in Europe (shown above in white) used a 2.5L turbocharged 5-cylinder to offer 305 horsepower and 325lb-ft of torque, and while I we almost certainly won’t be seeing a 5-cylinder engine, we will be seeing power figures in excess of those previous figures.

It is rumored and expected that the Ford Focus RS will be powered by a very similar 2.3L EcoBoost 4-cylinder engine to the one used in the 2015 Ford Mustang EcoBoost. In the Mustang, the 2.3L EcoBoost offers 310 horsepower and 320lb-ft of torque, but with the horsepower figure being only slightly higher than the older Focus RS and the torque levels being lower, I don’t think that Ford will just swap the motor from the Mustang to the Focus RS and call it a day.

We should keep in mind that with the 2015 Ford Mustang EcoBoost, fuel economy was a concern. Ford wanted the EcoBoost Mustang to be the most efficient muscle car ever and they achieved that goal while still offering very solid power levels. However, in the new Focus RS, fuel economy is far less of a concern so the Ford team could tweak the motor a bit to make even more power while the smaller, lighter Focus platform should still get solid fuel economy figures. Ultimately, I expect to see the Focus RS offering somewhere in the area of 325 horsepower and 340lb-ft of torque with the power being sent to the wheels via a proper manual transmission.

There is also a rumor that the next generation Ford Focus RS will have all wheel drive, which will allow it to compete very closely with the Subaru WRX STI, but that stands to be proven, as the previous Focus RS was a front wheel drive model.

Finally, it is expected that the new Focus RS headed for US dealerships could debut next month at the 2015 Detroit Auto Show, but should any information drop before that big debut – you will find it here on TorqueNews.com.

Tesla Contemplates A New Strategy for China Retail even As Sales Boom
Jay Leno on Elon Musk & EVs: “I Think He Should Get ... Credit"
END_OF_DOCUMENT_TOKEN_TO_BE_REPLACED