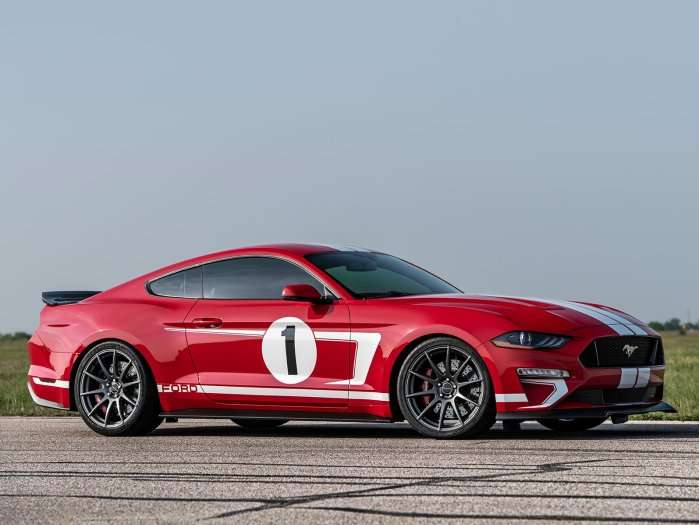 John Hennessey and his Texas-based tuning shop is best known for building high performance Chevrolet and Dodge products, but the company hit the 10,000-vehicle mark with a Ford Mustang – one which features a design that is available immediately for purchase in limited numbers.
Advertisement

John Hennessey and his company began offering high performance packages for a variety of American vehicles back in 1991 and recently, the Texas tuning company built their 10,000th vehicle. With Hennessey’s long history of building beefed-up versions of the Dodge Viper, the Chevrolet Corvette, the Chevrolet Camaro and many other vehicles from both Chrysler and General Motors, you might expect that this milestone was met with a thousand-plus-horsepower Corvette or Challenger, but it was actually a Ford Mustang.

The package begins with the HPE800 upgrade, adding a 3.0-liter supercharger with an air-to-water intercooler, an upgrade fuel system, a high flow air intake system and a tune – bringing the output to 808 horsepower and 677 lb-ft of torque. That allows this car to dash from a stop to 60 in just 3.3 seconds while covering the quarter mile in 10.7 seconds en route to a top speed over 200 miles per hour.

In addition to the engine upgrades, the 2019 Hennessey Heritage Edition Ford Mustang features a lowered suspension setup, unique 20-inch wheels with Michelin Pilot Sport Cup 2 tires and an array of carbon fiber bits, including the front splitter, the side sills and the rear spoiler.

Finally, as you can see in the image above, the 2019 Hennessey Heritage Edition Ford Mustang features a Ford GT racing-inspired paint job.

“We love the design and livery of the 2018 Ford GT Heritage Edition supercar that we took delivery of earlier this year. We thought that this look on our specially tuned Hennessey Mustang would also be very appropriate and a great way to celebrate our 10,000th build”, said John Hennessey. “This is one of the most beautiful Mustang we’ve ever built, and it has the power and performance to match its gorgeous looks”.

Only 19 examples of the 2019 Hennessey Heritage Edition Ford Mustang will be built and with a turnkey price of $89,950, the company likely won’t have any issue selling all 19. Again, that includes the price of the car, so for about $90,000, you could drive away with one of these 808-horsepower pony cars. That is a touch more expensive than the 797-horsepower Dodge Challenger SRT Hellcat Redeye, which tops out in fully-loaded form around $90,000, but for a Ford fan who wants a fast, turnkey Mustang – this is one of the best deals going.

DeanMcManis wrote on August 8, 2018 - 1:53am Permalink
Is $90,000 "Surprisingly Affordable" for a Mustang? I understand that it has been tuned to put out 808HP, but I wonder if it will be any quicker than the Shelby GT500 despite it's power advantage. One thing that I have seen all too often is that adding too much power to a RWD car on street tires (even street legal drag radials) results in the power overwhelming the tires, making the car slower than less powerful cars in the real world. It would be great to see an all-around performance comparison between this Hennessey Mustang against the Hellcat Redeye Challenger, GT500, and Camaro ZL-1.