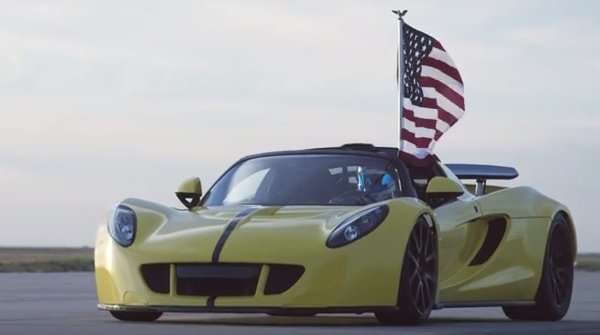 2016 marks the 25th anniversary of Hennessey Performance in Texas, so to celebrate their birthday, the team took the Hennessey Venom GT Spyder to the Lemoore Naval Air Station, where a 2.9 mile runway was awaiting the 1,451hp American supercar. John Hennessey’s plan was to beat the old convertible top speed record of the Bugatti Veyron Grand Vitesse to celebrate his company’s anniversary, but instead of just beating the Bugatti record – the Texas tuners smashed that record.

World’s Fastest Convertible
Back in 2013, the Bugatti Veyron Grand Vitesse set the record for the highest recorded top speed by a convertible with the top down – or removed – in the case of the Italian hypercar. The Bugatti went 254 miles per hour at the German Ehra-Lessien test track, and that run was certified by the German Technical Inspection and Certification Association. It was not certified by the Guinness Book of World Records, as their vehicle top speed records require competitors to make the run in both directions on the same surface and take the average of the two. Bugatti didn’t do that with the Grand Vitesse, and neither did Hennessey and their team at the Naval Air Station.

Instead, John Hennessey made one good, hard run down the 2.9 mile runway in California and before letting off, he hit a top speed of 265.6 miles per hour. In the same basic testing procedure as the one used for the Bugatti record, the Venom GT beat the Veyron by more than 11 miles per hour. Furthermore, John Hennessey stated that the car was still pulling when he was forced to lift, but if he had more room, he believes that the car would have hit its official 270mph top speed.

For comparison, the Hennessey Venom GT coupe hit 265.7mpg on the Lemoore runway before hitting 270.49 on the 3.22 test track at the Kennedy Space Center in Florida. Based on the fact that the Venom GT coupe was only a tenth of a mile per hour faster at the Naval base, the convertible should most certainly be able to hit 270 on the bigger track. Frankly, I would be surprised if we don’t see the team taking another shot at 270 sometime this year.

World Record Edition Venom GT Spyder
The Hennessey Venom GT Spyder is powered by a 7.0L LS7 GM V8 – similar to the one used in the C6 Corvette Z06 and the 5th gen Camaro Z28. In the Venom GT, a pair of turbos have been added to the massively-built LS7 and as a result, the Hennessey hypercar sends 1,451 horsepower through the 6-speed manual transmission to the rear wheels.

To celebrate the new top speed record, Hennessey will build three special World Record Edition Venom GT Spyders for public consumption and each of these 1,451hp, 265mph droptops will have a price tag of $1.3 million.

Crank up your speakers and check out the video below, showing the Hennessey Venom GT Spyder breaking the convertible top speed record.