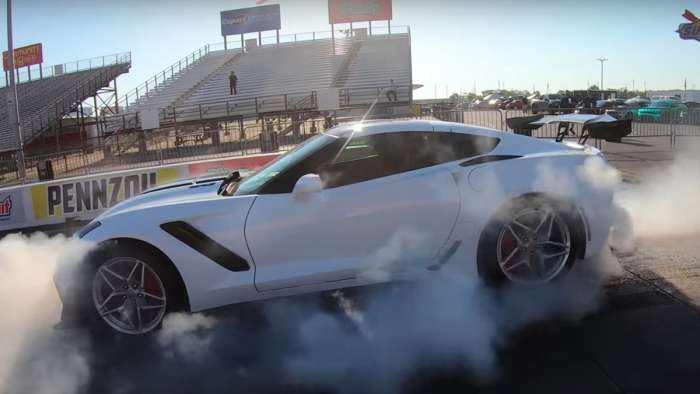 Hennessey has built the quickest 2019 Chevrolet Corvette ZR1 in the world, running mid-9s with their 1000-horsepower package.
Advertisement

Last week, we brought you the news of the first 2019 Corvette ZR1 to break the 1,000-horsepower mark. That car was built by the team at Hennessey Performance and since then, the Texas tuner got the car to the track –leading to results that are more impressive than the dyno numbers.

In fact, this Corvette ran a quicker quarter mile than any other C7 ZR1, making this the quickest LT5-powered car in the world.

The Build
For those who didn’t catch our piece when we first discussed this Hennessey-built Corvette, here is a quick rundown of the modifications.

This car is equipped with the Hennessey HPE1000 package, which adds a new camshaft, upgraded valve springs, upgraded valves, upgraded pushrods, ported cylinder heads, a high-flow air induction system, long tube headers, custom midpipes, high flow catalytic convertor and a new lower pulley work with the internal upgrades. Of course, all of these upgrades are brought together by a custom tune from Hennessey, lifting the output to 905 horsepower and 844 lb-ft of torque at the rear wheels.

Hennessey claims on their website that this package requires an upgraded automatic transmission, but when equipped with a set of drag radials, the HPE1000 package will allow the new ZR1 to run in the 9.40s. Based on this video, that number is a bit on the ambitious side, but in turning the quickest quarter mile time ever by a modern Corvette ZR1 – this Chevy still offers incredible performance.

Setting the Record
The video begins with footage of this white Corvette running a 9.652 at 144.46 miles per hour. The track announcer asks John Hennessey if that was a record, to which the head of the tuning company stated “for the next 30 minutes”. We don’t know how much later in the day the next run came, but John was right – that earlier record fell quickly.

On the second video in the run – which we get to watch from several angles including inside of the car – this Hennessey-tuned Corvette ZR1 runs a 9.529 at 144.81 miles per hour. That record was set with the car tuned for Shell V-Power 93 octane fuel with 16 pounds of boost pressure, with a set of Nitto 315/30/20 drag radials help put the power to the ground.

We are sure to see quicker C7 ZR1 quarter mile times as more shops build and tune the new LT5-powered supercar, but for the time being, the Corvette in the video below is the quickest of its kind.