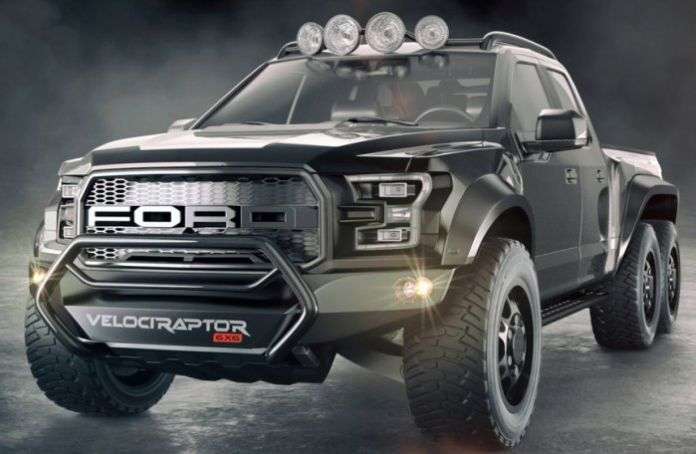 The Hennessey F150 VelociRaptor 6x6 Debuts at SEMA with 605hp

The folks at Hennessey Performance have cooked up the most extreme Ford F150 Raptor aftermarket package out there, adding an extra axle, a unique bed and a whole lot of extra power – and the VelociRaptor 6x6 is making its formal public debut this week at SEMA.
Advertisement

Last year, Hennessey announced their plans to offer a Ford F150 Raptor with a unique 6x6 drive configuration. At the 2017 SEMA Show, which started this morning in Las Vegas, the Hennessey VelociRaptor 6x6 makes its grand debut and it is every bit as outrageous as you would expect.

The cost of creating the Hennessey VelociRaptor 6x6 is just as shocking as the truck itself, starting at $295,000 (including the base price of the new F150 Raptor donor vehicle).

That price transforms the Raptor into the 6x6 VelociRaptor, but that package “only” includes the factory power output of 450hp and 510lb-ft of torque. Fortunately, for an additional $22,500, Hennessey will add their high performance package for the Raptor’s unique 3.5L EcoBoost V6 – lifting the output to 605 horsepower and 622lb-ft of torque. This extra power is achieved by adding new turbochargers, a high flow exhaust system, a larger intercooler and custom engine tuning.

So, to get a Hennessey VelociRaptor F150 with 605 horsepower, a buyer will be looking at a purchase price of roughly $317,500. Also, if the buyer wants to add unique interior upgrades or a big Brembo braking package, those items can be included for a price.

Realistically, I can’t imagine that Hennessey is going to sell a whole lot of these $300,000 6x6 VelociRaptors, but with a truck this extreme – we know that at least a few Hollywood celebs and pro athletes will grab up one of these monstrous F150 conversions.

Finally, for those new Ford F150 Raptor owners who like the sound of the big power, but who do not like the 6x6 look, there is a more affordable option. The EcoBoost tuning package is available on its own, so you can avoid the $295k upcharge for the 6x6 package while still enjoying the 605hp Hennessey engine package.