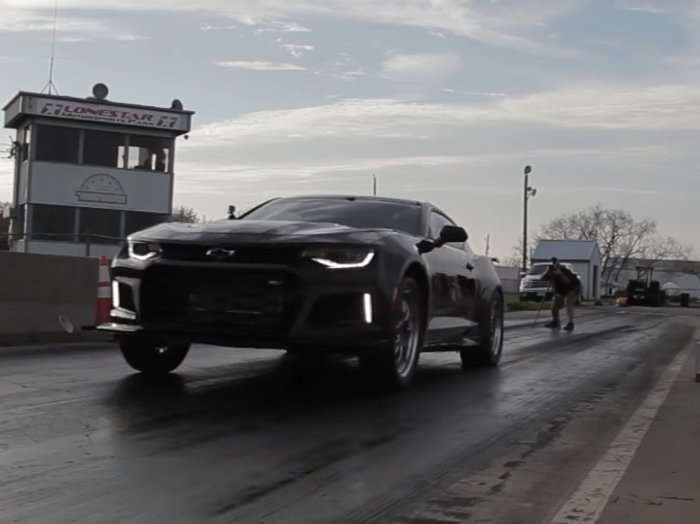 The folks from Hennessey Performance have finally taken their 1000-horsepower Exorcist Camaro ZL1 to the drag strip with stunning results – laying down a quarter mile time of 9.57 at 147 miles per hour.
Advertisement

When FCA announced that they would be bringing an 840-horsepower, 9-second, street legal Dodge Challenger to market, Hennessey Performance was quick to introduce the Camaro ZL1 Exorcist package. They gave the package this name because it was built to drive out the Demons and yesterday, the Texas tuner published video proof that this 1000-horsepower Chevrolet muscle car will beat Dodge’s quickest Challenger.

Package Details
The Hennessey Exorcist package for the 6th generation Chevrolet Camaro ZL1 offers official figures of 1,000 horsepower and 883 lb-ft of torque (at the crankshaft). That figure is reached by adding a new supercharger, a custom camshaft, ported cylinder heads with beefed up components, a new intercooler, long tube headers, high flow catalytic convertors, a stainless steel exhaust system and an engine tune to bring it all together.

The “base” Exorcist package costs $55,000 on top of the price of the Camaro ZL1 and if you have the 10-speed automatic, the required transmission build adds an extra $9,950 on top of that. Figure that the 2018 Camaro ZL1 with the 10-speed automatic transmission has an MSRP (with gas guzzler tax and destination) of $64,090. Not counting the drag radial tires, the Exorcist Camaro featured in this video would have cost $64,950, so when added to the MSRP of the car, this muscle car cost at least $129,040. Figure that the wheels and tires cost at least a thousand dollars, so it is safe to say that building the very car shown in the video below will cost you at least $130k.

That’s right – this Camaro has proven that it can run a quicker time than the stock Dodge Challenger SRT Demon’s production car record of 9.65. Of course, the Exorcist Camaro is not a production car, but for a ZL1 owner who wants a turnkey package that will beat Dodge’s quickest car ever – Hennessey has the answer.

The 9.57 Run
In the video below, we get to watch the Chevrolet Camaro ZL1 Exorcist make its incredible 9.57 quarter mile time with an even more incredible trap speed of 147 miles per hour. The video shows that run over and over again from a variety of angles, giving us a chance to hear and see the Hennessey-tuned Camaro ZL1 turn in its quarter mile best.

So, while the Hennessey Exorcist Camaro ZL1 will be limited to just 100 units per year and the entire build costs upwards of $130,000, this package makes good on the company’s promise to beat the Dodge Demon.

Crank up your speakers and enjoy the video footage below.

Mopar Guy wrote on March 7, 2018 - 7:54am Permalink
Hey .. Do the same upgrades to the DEMON and than run! This article is ridiculous! Stock is stock .. and ... modified is modified! You gotta compare apples to apples. What's next comparing John Forse' s fun car to the stock Demon?
Pat wrote on April 5, 2018 - 6:54pm Permalink
The demon is upgraded its a demon package just like that's a exocist package they both supercharged cars dodge just put there's in preduction