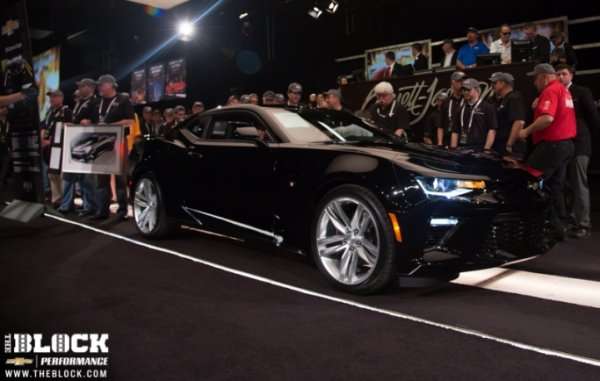 It has become so common for automakers to send the first example of a key car to a high profile auction for charity that is was almost expected that there would be several examples of the 2016 Camaro auctioned off with the arrival of the new generation. Both the 2016 COPO Camaro and the 2016 Camaro SS – both of which are the first of their production run – rolled onto the Barrett Jackson Scottsdale auction block this past weekend and when the bidding ended, both of these cars brought major money.

2016 COPO Camaro #1 of 69
In each of the past few model years, General Motors has built 69 examples of the COPO Camaro drag racing package. The COPO cars are built specifically for racing purposes and while they will blast down a quarter mile stretch in less than 9 seconds straight from the factory, they aren’t legal for road use. These cars have a price tag in the range of $100,000 if you buy one from an approved dealership, but at the high profile Barrett Jackson auction, we expected it to raise way more than MSRP – and it did. 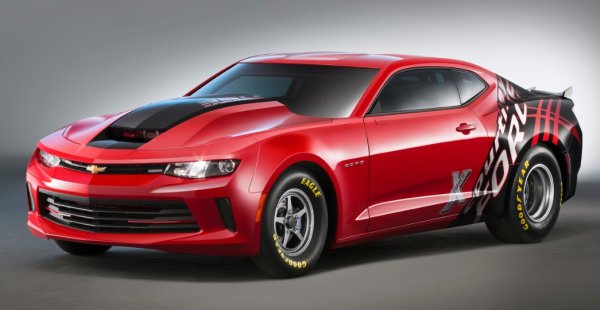 The first 2016 COPO Camaro, which is finished in the red and black racing livery of NHRA driver Courtney Force, made its debut at the 2015 SEMA Show in Las Vegas. It was dolled up with the unique livery to draw attention at SEMA, but that unique design allowed it to stand out in the crowd at the Barrett Jackson Scottsdale auction.

When the auction ended, 2016 COPO Camaro #1 sold for $300,000 to an unnamed bidder. The Block stated that the buyer owns and races another modern COPO Camaro, so there is a chance that we could see #1 at the track in the future.

2016 Camaro SS VIN #1
Also sold for charity at the Barrett Jackson Scottsdale auction was the very first production unit of the 2016 Chevrolet Camaro (shown above) – a black 2SS coupe with an Adrenaline Red interior and the new 8-speed automatic transmission. This was essentially a fully loaded 2016 Camaro SS coupe and the proceeds of this auction went to Kettering University.

Now, some of you might be considering the fact that the 2016 Chevrolet Camaro has been on sale (and being delivered) for a few months now, and you are correct. In most cases, the first production unit is auctioned off before the vehicle goes to production, so the buyer of vehicle #1 is established well in advance. In this case, General Motors set aside 2016 Camaro SS coupe Vin #0001 for this auction, so the buyer won’t have to wait.

Honestly, I’m more than a little surprised that Hendrick didn’t buy the first 2016 COPO Camaro as well, but since he did buy the first production unit of the 1955, 1956 and 1957 Corvette as well – perhaps he was looking to follow a strict budget (or around $4 million).

Art Woosley wrote on February 1, 2016 - 9:22pm Permalink
The prices paid for these car is delusional, disgraceful and embarrassing. The buyers have way to money wasted on these unimportant cars. Why don't they spend the money on something more useful like for war vets or needy children.