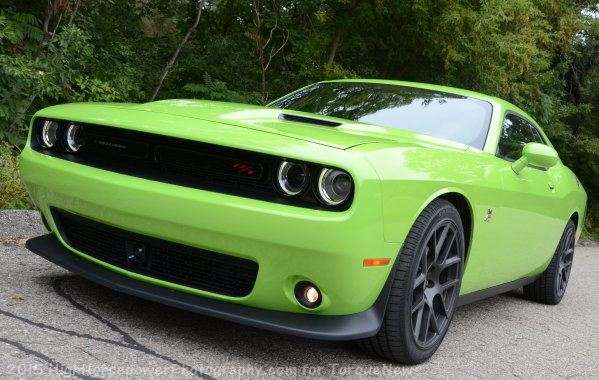 A new report indicates that since the 2015 Dodge Challenger went on sale late last year, those packages with one of the various Hemi V8 engines are comfortably outselling the V6 models – marking a surprising shift in take rate in a segment where the less-powered V6 engine usually dominates sales figures for all of the Detroit muscle cars.
Advertisement

While the Detroit muscle cars are best known for their powerful V8 engines, sales figures for the Dodge Challenger, Ford Mustang and Chevrolet Camaro in the past few years have favored those packages with V6 engines. While both Ford and Dodge saw the V6 engines outselling the V8 models by a small margin, the V6 was still the most popular engine in a segment where power reigns.

However, a combination of the awesome new Hemi-powered packages for the 205 Dodge Challenger and gas prices below $2 bucks a gallon have led to an interesting shift in take rate among Mopar muscle car buyers. According to the folks at Allpar, the V8 models are outselling the V6 models in the 2015 Challenger lineup by a rate of almost 2 to 1.

Throughout the early portion of the 2015 model year for the Dodge Challenger, the introduction of the R/T Scat Pack (shown above) with the 392 cubic inch Hemi that is shared with the SRT 392, along with the new SRT Hellcat, have led to a huge spike in sales among the high powered models. Popularity of the SXT with the V6 model has dropped to just 38% and the Challenger R/T has also seen the take rate drop to just 31%. On the other hand, the R/T Scat Pack has posted an early take rate of 16% while the SRT 392 with the same engine has accounted for 6% of 2015 Challenger sales. Finally, the new Hellcat Challenger has accounted for an impressive 9% of 2015 model year sales.

This shift in sales is very clear proof that the new R/T Scat Pack with the 485 horsepower 6.4L Hemi has proven to be a big hit among those buyers who want the big power of the SRT lineup – but not the big price. Also, the 9% take rate of the Hellcat Hemi shows that even in an era where efficiency is at the foreground of so many automotive conversations, there is still plenty of interested in very (very) high performance engines.