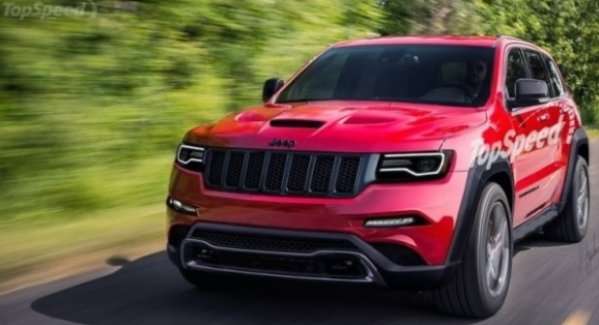 In addition to the big Dodge rumors that we covered yesterday, the Chrysler dealer announcement event earlier this week introduced the Hellcat powered Jeep SRT Trackhawk – a 707 horsepower beast that will almost surely be the quickest, the fastest and the most powerful factory-stock sport utility vehicle anywhere in the world.
Advertisement

Before I get into the details, I have to point out that none of this information on the SRT Hellcat Jeep is official, as it all came from sources who attended the Chrysler dealer announcement event in Las Vegas. The Chrysler Group hasn’t offered up any information at all, so what we are going by (and what everyone is going by right now) is what those dealership representatives on hand in Vegas posted on the internet. To say the least, the sources are questionable, but with so many stories from people around the country matching up – we have a good idea of what Chrysler told their dealership folks about the 707 horsepower Jeep Grand Cherokee.

To be clear, the image above is a rendering from the folks at TopSpeed, which you can read more about by clicking here.

Hellcat Grand Cherokee Private Debut
There are no pictures and no official information, but scores of dealership employees have happily told members of the media that they were introduced to the Jeep Grand Cherokee SRT Trailhawk, complete with the supercharged 6.2L Hellcat Hemi. Reports insist that this Jeep looks similar to the renderings floating around the internet and as we had all hoped, it packs 707 horsepower and an advanced all-wheel drive system that will make the best use of the power. Even though the Jeep will be much heavier than the Challenger or Charger, the fact that it spins all four sticky tires might make it quicker down the quarter mile when compared to a stock-tire Hellcat car. In fact, reports from the dealer show state that the company is expecting a 0-60 time in the mid 3 second range…from an SUV.

Rumored Hellcat Jeep Pricing
Best of all, some of these attendees state that the Trackhawk will start at $79,995. That is totally unofficial (as is all of this), but that price range would make sense. Figure that when you look at the pricing of the 2015 Challenger in SRT 392 and SRT Hellcat trim, there is an increase of about $13,300. The current Jeep Grand Cherokee SRT with the 392 engine starts at $64,895 (not including destination), and if you add $13,300 to that, you get a price of $78,195. Add on the $995 destination fee and you come to $79,170…with a couple other little upcharges here and there bringing the price to $79,995.

The Hellcat Jeep We All Want
Since the supercharged 6.2L Hellcat Hemi debuted in the Dodge Challenger and later the Dodge Charger, making them the most powerful muscle car ever and the most powerful sedan in the world, there was an instant cry for a Hellcat-powered Jeep – which would be the most powerful sport utility vehicle in the world. The current SRT Jeep is already one of the best performing SUVs sold in the world, but there are more powerful opponents from across the pond. If the Hellcat made its way into the Grand Cherokee SRT, it wouldn’t have to worry about any competition from the Europeans. This thing will crush whatever BMW, AMG, Audi or Lamborghini can offer up and the odds are good that it will do so for a fraction of the cost of those European rivals.

The problem, of course, is that the Hellcat Hemi is in such high demand that the company wasn’t able to fill all of the orders for the 2015 Charger and Challenger. Even though there is a price increase for both cars, we can expect that the Hellcat cars will continue to be in short supply in 2016 as well and until the company has comfortably met all of the demand for those two high performance cars – they aren’t going to introduce a high performance SUV.

Rumors suggest that the Hellcat Jeep will arrive sometime next summer, but I’m not going to believe that until I see it. Considering that the non-dealer world hasn’t even seen the Trackhawk yet, I have a hard time believing that it will be in showrooms in less than a year. However, if the Hellcat Jeep is set to arrive for the 2017 model year, we will almost certainly see it at one of the big auto shows this winter.

robinspat wrote on September 17, 2015 - 3:29am Permalink
Range Rover will kill it off road and on