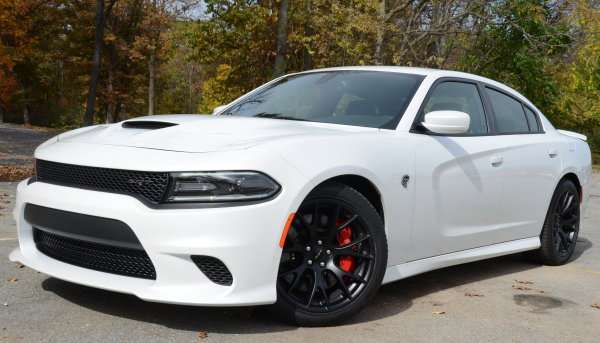 If you are hoping to place an order for a 2016 Dodge Challenger Hellcat or Dodge Charger Hellcat, you will have to wait until sometime in January, as last night marked the end of the last ordering wave of America’s most powerful performance cars.
Advertisement

After what turned out to be a bit of a fiasco for the 2015 model year Hellcat Challenger and Charger, the Chrysler Group looked to fine-tune the process a bit for the 2016 model year. Fortunately, Chrysler has already filled the orders for roughly 8,500 Hellcat orders during the 2015 model year so while demand is still high, it is not as high as it was at this time last year. Because of that, Chrysler has been able to roll out a new ordering program and allocation process that will allow the automaker to put more cars in the hands of prospective buyers rather than in the showrooms of dealers looking to apply huge markups.

2016 Hellcat Ordering
Orders for the 2016 Dodge Challenger Hellcat and Dodge Charger Hellcat began with those folks whose orders were cancelled for the 2015 model year and after those folks were taken care of, the first main wave of Hellcat orders for the 2016 model year opened. Yesterday was the final day of that wave of Hellcat Challenger and Charger orders, and the company will spend the next month or so filling those orders before reopening the Hellcat order banks sometime in late January or early February.

Available from dealership to dealership during this first wave was based on Hellcat Charger and Challenger sales success during the past year and the next wave of allocation will be based on how quickly dealerships move the cars from this wave of production and deliveries. If your local Dodge dealer was allocated one Hellcat Challenger during the past wave of orders and they had a buyer lined up, there is a good chance that they will have first shot at one of more cars in the next wave. However, if your local dealership ordered a car in this previous wave without a buyer lined up, leading to the car sitting on the showroom floor for a while before selling – they will be less likely to get any allocation during the next wave.

So, if you ordered your 2016 Dodge Challenger or Charger with the supercharged 6.2L Hellcat Hemi engine, you should be taking delivery of your car in the next month or so. There have already been quite a few Plum Crazy Hellcat cars of both varieties delivered over the past month and with more 2016 models heading to dealers every day – the waiting list for the Hellcat cars seems to have gotten much, much shorter.

Markups Exist, but Paying MSRP is Possible
There is still enough demand that some dealerships are adding an extra $5,000 to the bottom line and those cars with that higher price are still selling. However, there are dealerships around the country who are accepting orders for the Hellcat Dodge Challenger and Charger, so when combined with the slightly lower demand – the odds of finding a 707hp Dodge for MSRP are getting better every day.

I spoke with James Smith of Chuck Stevens DCJR in Bay Minette, Alabama and he explained that they currently do not have any waiting list for the Hellcat Charger, even with their shop advertising Hellcat sales at MSRP. In fact, they were advertising yesterday afternoon that they had one allocated unit available for custom order before last night’s deadline, so anyone who wanted to order a custom configured 707hp Charger at MSRP could have done so last night. Now, everyone who wants to place an order will have to wait until January, but with order banks closing last night, we can expect to see some unreserved Hellcat cars reaching dealerships from this wave of allocation over the next couple months.

FarAwayFromHere wrote on December 15, 2015 - 1:28am Permalink
Maybe the reporter should verify his facts before reporting, Allot of us here in Canada with sold 2015 orders,some over 450 days have not been filled. There are appx. 20 of us, (That we Have the data on) and possibly more,ho can say? We have the firm data (spread sheet)to back this up! We are all stuck in BX,since Late 2014-early 2015. And now late 2015 since our orders rolled over in Canada! I Hope you Are Correct on the fact OUR ORDERS WILL BE FILLED, BECAUSE WE HAVE HAD NO COMMUNICATION WHATSOEVER,FROM FCA. "On behalf of my Canadian HC.Org Brethren" Thank you FarAwayFromHere