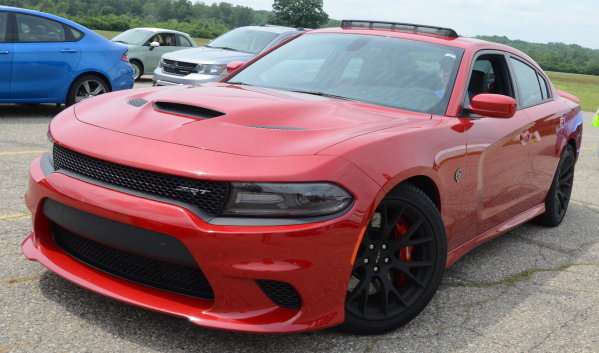 Hellcat Charger, Challenger Becoming More Available Around the US

As the 2016 model year units of the Dodge Challenger and Dodge Charger reach dealerships around the United States, we are seeing more and more Hellcat versions sitting unsold on lots – meaning that if you have been waiting for your chance to own one of the 707hp beasts, some careful shopping will almost certainly net you a new supercharged muscle car.
Advertisement

Throughout most of the 2015 calendar year, it was nearly impossible to get a Dodge Challenger SRT Hellcat or a Dodge Charger SRT Hellcat unless you placed an order well in advance or were willing to pay a massive markup over MSRP. The Hellcat cars were so in demand that the company had to cancel hundreds of orders which they just couldn’t get around to building and while some shopping could turn up an unreserved Hellcat Challenger or Charger, available cars were very few and very far between.
Later in the year, the shortage of the heavy duty 8-speed automatic transmission meant that many of the units being sent to dealers had the 6-speed manual transmission, but finding one with an automatic was literally impossible.

Fortunately, that is changing with the arrival of the 2016 model year Hellcat Challenger and Charger, with cars on dealership showroom floors around the country with both the manual and automatic transmissions. This means that those folks who didn’t preorder a Hellcat Challenger or Charger will have an easier time finding a dealership with an available car on their lot – although buyers can still expect to pay a premium price for the most powerful American production cars of all time.

2016 Hellcat Challenger and Charger Popping Up
I am a long time Mopar fan and I belong to a long list of Mopar fan pages on Facebook. Over the past year, I would occasionally see car salesmen posting about available Hellcat cars, but those cars were almost always equipped with the manual transmission and they were sparsely scattered across the USA.

This means that for the first time, someone who didn’t want to preorder a 2015 Dodge Challenger or Charger can now hunt around and buy a new Dodge with the supercharged Hellcat engine and the 8-speed automatic transmission. The Hellcat Challenger with the manual transmission continues to be available as well, but the Hellcat cars in the highest demand are now available around the country.

For example, there is currently a 2016 Charger SRT Hellcat in Plum Crazy purple on eBay with a buy it now price of $76,135. The listing includes a photoshopped image of the window sticker with that price displayed, along with a base price of $65,945 and $5,190 worth of options and fees. This should equal $71,135, but the dealership has obviously marked the car up by $5,000 – which is a very average markup for these uber popular muscle cars right now. The location of this vehicle isn’t listed, but in searching the phone number listed in the account, this Plum Crazy Hellcat Charger is in the possession of the AutoServ Dealer Group in Tilton, New Hampshire.

So, if you have been waiting to buy a 2016 Dodge Challenger or Charger with the Hellcat Hemi engine, now is a great time to begin shopping around your local dealerships, as the 707hp muscle cars are more available now than they have ever been in the past.