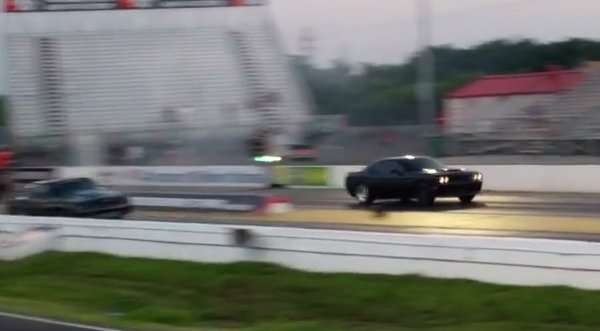 A video has surfaced showing a Dodge Challenger SRT Hellcat blasting through the quarter mile in just 10.03 seconds, making it what I believe to be the quickest Hellcat car thus far and he did so with a surprisingly short mod list.
Advertisement

The 2015 Dodge Challenger SRT Hellcat is clearly and unquestionably claimed the title of the best muscle car on the drag strip of all time, with cars with nothing more than sticky tires dipping well into the 10 second quarter mile range. Sure, there have been cars like the Ford Mustang Lawman and the Dodge Hemi Dart/Hemi Barracuda, but those were all limited production packages intended specifically for racing whereas the Hellcat Challenger is a full-fledged, daily drivable street car – that happens to run in the 10s with no real effort.

So Close to 9s
The video below shows a 2015 Dodge Challenger SRT Hellcat blasting through the quarter mile in just 10.02 seconds. Plenty of people will point out that there are lots of cars on the road which can run in the high 9s, but this Challenger is tickling the 9s with a surprisingly short mod list. The owner has added a different lower pulley for slightly increased boost pressure, a better flowing cold air intake, methanol injection, a 50 shot of nitrous, a good tune, a tougher driveshaft and a set of slick, sticky tires. From the throttle body to the exhaust tips, the Hellcat engine in this Challenger is in the same form as it came from the factory, while various substances being sprayed into the engine help to push the power even further than the extra boost.

Other than that, this Challenger SRT Hellcat is stock, so this Dodge muscle car is being hurdled down the quarter mile time and time again with the stock 8-speed transmission and the stock rear differential. Like most other Hellcat owners who do lots of racing with sticky tires, he has swapped out the stock driveshaft, but this low 10 second Challenger is proving just how tough the stock engine and stock drivetrain components are – allowing owners to really use all 700+ horsepower.

In running a 10.03 at 140 miles per hour, this Challenger Hellcat with climate controlled leather seats and a high end infotainment system is almost getting down the track quickly enough to battle some of the early Challenger Drag Pak cars.

This video was uploaded a week ago, so it is safe to assume that this run was made on a hot summer night, so this Hellcat Challenger will almost certainly be featured in a 9 second video very soon. Three hundredths of a second can be shaved with a cooler night or a tail wind or even a slightly better launch, and I cannot wait to see a car with no internal engine, transmission or differential mods running in the 9s.

The modern muscle car era is truly in full effect.