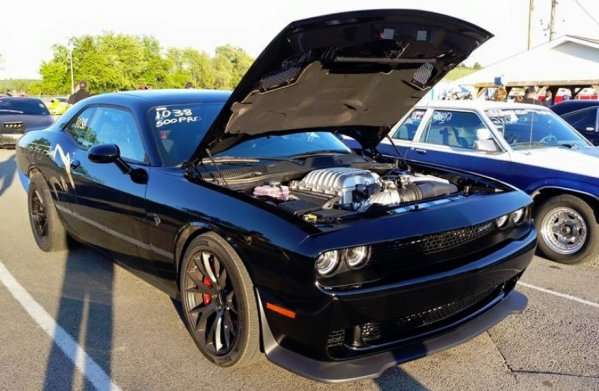 The 2015 Dodge Challenger SRT Hellcat that we featured a few weeks ago while running a handful of high ten second runs was back on the track this weekend with incredible results – running even quicker and posting what could be record quarter mile times for the 707 horsepower Mopar muscle car.
Advertisement

The 2015 Dodge Challenger SRT Hellcat shown above should look familiar to our regular readers, as a few weeks back we brought you the story of this particular supercharged Challenger. It is owned by long time sportsman drag racer Ricci Cavallaro and shortly after getting it, Cavallaro was quick to get to the track to see what it could do. Based on his years of experience racing 10 second cars, he knew that a good set of tires is a must-have for any respectable quarter mile car, so he fitted up a set of Nitto drag radials before heading to Pittsburgh Raceway Park for the first time.

Thanks to the sticky surface, Cavallaro’s experience and those sticky tires, this black Hellcat Challenger was able to lay down back to back to back 10 second runs. To be exact, he ran a 10.97, 10.93 and 10.97, all of which were respectable times, but this was the driver’s first time out and he was quick to say that he would get faster with some practice.

Well, that practice came this past weekend and with it came some significantly quicker times – times which could be a record for a Hellcat Challenger with no modifications to the engine.

Two Modifications, None to Add Power
When Ricci Cavallaro took his Hellcat Challenger to the track for the first time, he did so with a set of sticky Nitto drag radial tires, but it was otherwise factory stock. After seeing what kind of numbers he turned on his first trip to the track, Cavallaro knew that he could cut those times, but he wanted to make sure that he didn’t end up ripping the driveshaft in half like some other Hellcat owners, so before heading back to the track, he had a stronger driveshaft installed.

Other than the stronger driveshaft and the Nitto tires, Cavallaro’s Dodge Challenger SRT Hellcat is stock and this past weekend, he laid down some times which could set records.

On the first run, Cavallaro left the transmission in drive, set everything except for the suspension setup to track mode and launched as hard as he has in his few trips down the track. The result was a wicked-fast 10.76 at 130 miles per hour. On the second run, he came out a little harder, pulling a 1.58 60 foot time en route to a 10.72 at 129 miles per hour. Then, on his final time trial run of the day, Cavallaro got away from the line with a 1.57 short time and on the big end – he ran a stunning 10.71 at 129 miles per hour.

This Could Be a Record
A few weeks back, we featured another Hellcat running a 10.71, but we quickly learned that the car in question was far more modified than the car shown in the video today. I have been speaking with Ricci Cavallaro since shortly after he got his Hellcat Challenger, and he isn’t using modifications to go fast – instead beefing up the drivetrain and applying tires to get off of the line quicker. With those modifications on the other 10.71 Hellcat Challenger, Cavallaro’s Mopar muscle car would likely turn even better times, but the bottom line is that Cavallaro ran 10.71 with just a driveshaft and tires.

There was also a Hellcat Challenger in Texas that ran a 10.48 months ago, but many people have come to question those reportedly stock times and the fact that no more videos of that Hellcat Challenger have surfaced tends to support the angle of the skeptics.

So, until some other Hellcat Challenger owner offers up proof of a 10.70 run with nothing but drag radial tires and a heavy duty driveshaft, it appears as though Ricci Cavallaro has the quickest stock-engine Hellcat Challenger in the world.

hal wrote on September 8, 2015 - 2:23am Permalink
I have talked with the driver who went 10.48 at 133 mph. It was customers car, not the drivers car. Burns Brothers Dodge sold the car and the owner agreed to let Burns go for a record run. That's why we have not seen any additional passes ... the customer has his car back and that's the end of the story. JC a service tech and experienced driver was the pilot