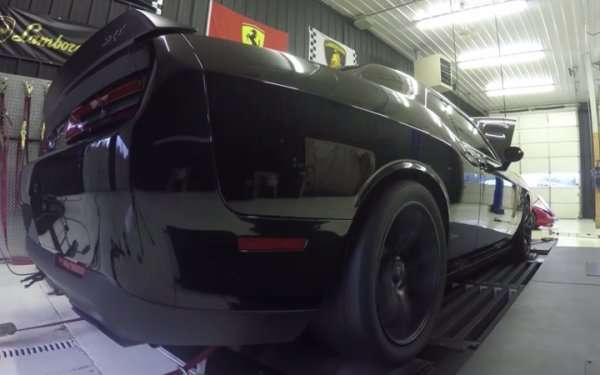 This Hellcat Challenger is Headed for 1000hp

The 2015 Dodge Challenger SRT Hellcat is the most powerful American muscle car of all time, but in an effort to see just how much power they can get from the new supercharged Mopar machine, an Indiana-based company is nearing the 1000hp levels – with very little work done.
Advertisement

The 2015 Dodge Challenger SRT Hellcat has 707 horsepower and 650lb-ft of torque in stock form, making it the most powerful American production car by a comfortable margin when it first debuted. Since then, the Dodge Charger SRT Hellcat has since matched those power figures so there are two Dodge products atop the list of the most powerful American production cars ever. The 2015 Chevrolet Camaro Z06 is the closest competitor to the Hellcat Challenger, but with “only” 650 horsepower and 650lb-ft of torque, the new super-Vette falls short.

Even without real competition from other factory-stock cars, Dodge Challenger Hellcat owners are likely to run into more powerful cars which have been modified and it comes as no surprise that owners are looking to squeeze more power out of this beast. It does come as a surprise that we haven’t seen more shops working to make big power from the Hellcat Challenger, but the folks from Forza Tuning and Performance are the first I’ve seen who are publically making a run for 1,000 horsepower with the supercharged Hemi.

Forza Builds, Dynos the Hellcat
The folks at Forza Tuning and Performance have put together a handful of short videos showing their progress with the 2015 Dodge Challenger SRT Hellcat, including a look at the dyno runs and the dyno sheets.

The first video below shows the Hellcat Challenger being worked out in stock form, at which point it made 654 rear wheel horsepower and 609lb-ft of rear wheel torque. That video ends by teasing the Stage 1 package, which includes new spark plugs, a cooler thermostat, Amsoil 0W-40 Signature Series oil and a Forza in-house custom tune.

The second video begins by showing us the Hellcat Challenger dyno run with the Forza Stage 1 kit, which results in 691 rear wheel horsepower and 632lb-ft of rear wheel torque. Next, this second video adds an ATI 10% overdrive lower pulley, which adds 1-2 pounds of boost and lifts power levels to 733 horsepower and 674lb-ft of torque.

In the third video from Forza Tuning and Performance, the Hellcat Challenger has been fitted with ARH headers and cat deletes before heading back onto the rollers. The headers added more power and torque, with the output climbing to 746 rear wheel horsepower and 693lb-ft of rear wheel torque.

The third video ends by showing the Hellcat Hemi with the top end pulled apart, promising development of the Hellcat stage 4 and 5 kits – with the ultimate goal being 1,000 horsepower.

Checking Forza’s Numbers
There are a few key points with these videos that my Hellcat-hating readers will be quick to point out. First and foremost, the stock Hellcat Challenger dyno run resulting in 654 rear wheel horsepower is much higher than other dyno numbers I’ve seen – from both private owners and media outlets. Most of the Hellcat Challengers I’ve seen tested on the dyno make in the 625-635hp range, so this dyno is probably a bit on the high side.

Next, the math listed in their video descriptions are likely to get major criticism from the Hellcat haters. Under one video, they state that 654 rear wheel horsepower leads to 817 horsepower at the crank. This has to have been calculated by assuming an incredibly high drivetrain loss rate of 25% and while we all know that the Hellcat Hemi is underrated, it isn’t underrated by 110hp. They used that same 25% ratio when calculating the crank horsepower with their various stage kits, so I would call their numbers a little higher than they really are.

We will continue to follow the progress of Forza Tuning and Performance as they work towards getting their Hellcat Challenger to the 1,000hp mark. In the meantime, enjoy the videos below of the Forza Hellcat on the dyno.

mort wrote on August 10, 2015 - 10:38am Permalink
The Hellcat is not the most powerful American car, The Tesla P85 D in torque and the P90 D in torque and HP, are both more powerful and quicker sedans. In fact the P85D broke the same dyno.
Simon Domett wrote on August 31, 2015 - 12:09am Permalink
Yeah but the Tesla is NOT a combustion engine you have to compare apples with apples - eg the Mustang and Camaro which are both V8s, go and compare your Tesla with another electric car.
Jim Stevens wrote on December 25, 2015 - 3:16am Permalink
The tesla is only good for a couple of runs, has limited range and is not visceral. No noise and top speed ,not even close to the hellcat. Moreover, from a 40mph roll the hellcat will destroy just about anything in the market with a impressive top speed of 199 mph. The Tesla isnt even in the same top speed stratosphere. I just got my Hellcat and have owned some of the most powerful and expensive cars in the world. This car is larger, more comfortable, has great electronics and is truly an incredible accomplishment. It also has a 5 yr sixty thousand mile warranty. This car is as smooth and comfortable as my s63 amg amazing. As a car guy I am truly impress withstand his car and believe it is one of the greatest automotive accomplishments ever.
Steve wrote on July 24, 2016 - 5:54pm Permalink
You say your Challenger hellcat came with a 5 year warranty. Most cars today do come with a 5 and 3 year warranty. However 1 day shortly after taking possession of my 2016 Challenger hellcat, i was reading the warranty and Chrysler went on about all the vehicles with the 5 and 3 year warranties, then right at the end it stated, except the srt or srt hellcat, i can't remember. One thing is 100% the Challenger hellcat only comes with a 3 and 3 year warranty. No 5 year powertrain warranty. Steve
john wrote on June 8, 2016 - 12:48am Permalink
Telsa is a electric car, it doesn't fall in the same class as a gas powered car, because electric car have instant power instead of gas which takes time for the power to kick in
Reg Ekiss wrote on January 2, 2016 - 10:11pm Permalink
Jim, I could not agree more. Better yet, considering it is a luxury race car, it is so smooth and easy to drive, you could drive it through a crowded school yard with ease. Oh sure, the unlimited torque from the tesla may make some drag races a bit more complicated, but you would never keep up with me from city to city, it might take a few tanks of gas, but not hours of recharging. So the Cat rules again. Love my cat as well.
Josh L wrote on April 22, 2016 - 12:51am Permalink
Elon Musk is coming out with a 900hp Tesla Roadster. Lighter body. Top speed over 200 mph and 0-60 in 2.6 sec.
John Donkeyman wrote on March 7, 2018 - 11:49am Permalink
Tesla is a joke a 2 pump chump Best place for it is out in space floating around getting destroyed by passing objects The same holds true on Earth as the Hellcat passes is destroying any dream it had at beating it How much does that Tesla cost LOL Put the difference into a modded Hellcat