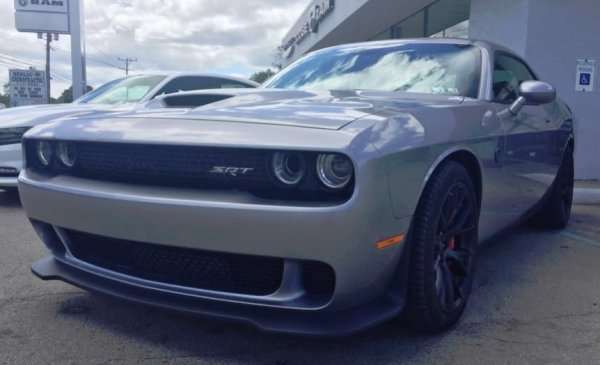 The image above shows a 2015 Dodge Challenger SRT Hellcat in silver with the 6-speed manual transmission. This Challenger was delivered to a Dodge dealership in Western Pennsylvania earlier this week and the lucky new owner took ownership of this beast shortly after. This was this particular dealership’s second Hellcat Challenger sold and delivered, with hopes of more examples of the most powerful muscle car ever being delivered to their lot in the near future.

Why Does This Car Matter?
The significance of this silver Hellcat Challenger being delivered is that it refutes the claims made by some uninformed online critics who insist that the company has stopped building and delivering the 707hp Dodge. The fact of the matter is that the Chrysler Group team is still doing its best to fulfill the many preorders placed for the world’s most powerful muscle car, but they are still dealing with the engine production constraints caused by the shortage of superchargers and the length build time for the 6.2L Hemi.
Why the Slow Process?

The production process is considerably slower than it is with the other Dodge Challenger models – especially when you add in the demand for the 2015 Charger SRT Hellcat that relies on the same engine – so while production continues to move forward, the Brampton plant simply isn’t able to build them fast enough to fill all of the orders.

The key problem is and always has been the shortage of the Hellcat supercharger unit. This entire assembly is built by a third party company and then it is shipped to the Hemi plant in Saltillo, Mexico. The supercharger is then added to the already assembled 6.2L Hemi engine and when the entire engine is built, it is mounted up to a dynamometer, where it will be run for 45 minutes to both break it in while also confirming that every single engine actually produces at least 707 horsepower.

After the run in process is completed, the Hellcat Hemi engines are shipped to the Brampton Assembly plant in Canada, where the engines are dropped into waiting vehicles. From there, the production process is completed and the car gets shipped to the dealership. Getting the superchargers from the supplier and breaking in every engine slows production, but it also allows and guarantees that every engine can make the designated power.

Long Story Short – the Hellcat Challenger is being delivered every day, but it takes time, so patience is essential.