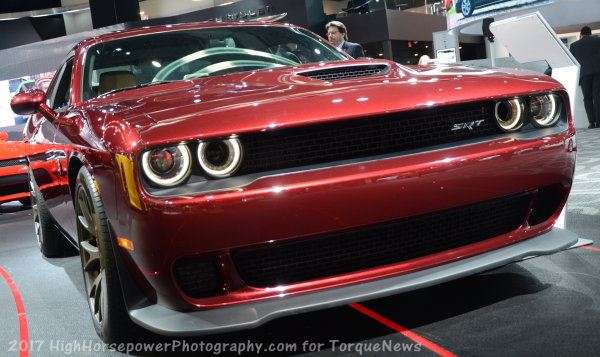 Although the Dodge brand isn’t technically offered in Europe, the Hellcat Challenger and Hellcat Charger are both on display at the ongoing 2017 Geneva Motor Show – allowing the Mopar muscle cars to flex their muscles with help from the European importer responsible for bringing these beasts from the USA.
Advertisement

FCA doesn’t offer the Dodge brand in Europe, but over the past few years, Auto Export Corporation (AEC) has been importing Dodge and Ram brand products from North America to various countries around the European continent. AEC is the authorized importer of Dodge and Ram brand vehicles in the European market with more than 130 dealers, and in addition to handling the process of getting the cars across the pond, they also handle all of the changes required for European road use.

To showcase their Dodge and Ram brand offerings, AEC offers a display of the American vehicles offered in Europe at the Geneva Motor Show. Geneva is one of the biggest auto shows in Europe, making it a hotbed for new model debuts and a popular event for the automotive media. Displaying your vehicles at the Geneva Motor Show puts them in front of more eyes than any other show, so at the 2017 show, AEC rolled out a collection of Dodge and Ram brand vehicles to show prospective buyers some of FCA’s highest performance American models.

Fortunately, the folks at AEC rolled out a pair of Hellcat cars to the Geneva Motor show – one Challenger and one Charger – to remind the European automakers what American muscle cars are capable of. When you combine the level of performance with the impressive list of high tech features, the Hellcat cars are surely hot attractions at the Geneva Motor Show.

Ram at Geneva
While the Dodge Challenger SRT Hellcat and Dodge Charger SRT Hellcat are drawing in high performance fans at the 2017 Geneva Motor Show, the Ram brand takes a slightly more practical approach – while still showing off plenty of American muscle.

In addition to a pair of 5.7L Hemi-powered Ram 1500 pickups in Limited and Sport trim, AEC also brought out the awesome new Ram 2500 Power Wagon with the 6.4L Hemi. These Hemi-powered pickups are likely quite expensive through the importer (AEC doesn’t list pricing on their website), but with very few vehicles like this being offered by European companies, the Ram brand trucks could be a popular option for those European drivers who need a larger, hard-working vehicle which can tow and haul serious weight.

Of course, the Power Wagon also offers offroading capabilities which are surely hard to come by from any of the mainline European brands, with the strongest competition likely coming from importers handling the new Ford F150 Raptor.

While going through an importer makes acquiring a Hellcat Challenger or Charger in Europe more expensive and more difficult than dropping into your local dealership, AEC is bringing America’s most powerful production cars across the pond to help muscle car fans terrorize performance cars from the local automakers. Thanks to AEC, the Geneva Motor Show offers attendees a chance to see America’s strongest muscle cars up close and in person.