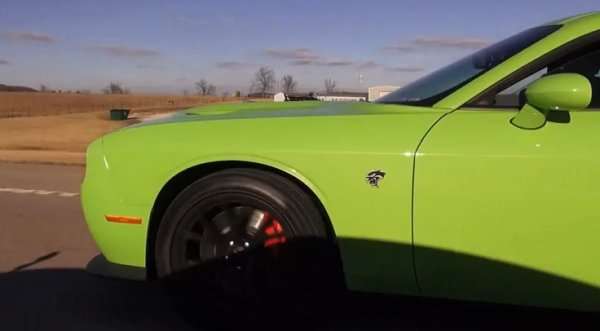 We have seen plenty of videos showing the Hellcat Challenger and the C7 Corvette Z06 racing other cars and each other, and today we have a new clip of these two heavy hitters going head to head on the open road – along with a Mustang GT500 that is badly outmatched by the blown Mopar muscle car.
Advertisement

We have already seen one video showing the 2015 Chevrolet Corvette Z06 and the 2015 Dodge Challenger SRT Hellcat, with the brawny muscle car beating the new GM supercar pretty soundly several runs in a row. This new video shows the Hellcat Challenger going head to head with the new Z06, but this time, the Challenger doesn’t hand out the same merciless beatings that we saw in the first Hellcat-v-LT4 video battle. These cars have manual transmissions and are factory stock with a driver and one passenger, which is true Mustang that joins the video late in the action as well.

Hellcat Challenger Versus Corvette Z06
This newest video showing the 2015 Dodge Challenger SRT Hellcat racing against the 2015 Chevrolet Corvette Z06 has two manual transmission cars going head to head. In the previous video, the Hellcat Challenger had the lightning quick 8-speed automatic, and that likely helped the Mopar owner to hand out those repeated beatings to the Corvette. This time, we see driver skill play a much bigger role, as these two American monsters take turns winning races and it looks as though the win goes to whichever driver is able to get through the gears more quickly. Several of the races are close, which each of the two cars taking turns winning the short runs and some of the other runs are total blowouts – and both the Corvette and the Challenger pull big wins as well.

While the first racing video with the Hellcat Challenger racing the Corvette Z06 led some to believe that the Dodge is clearly the better of the two choices for a long highway roll race, this video paints a little different picture. The self-shifting Challenger was able to outrun the manually shifted Corvette over and over, but the fact that the two cars went back and forth when they both have a manual transmission shows that a race between these two premium American performance cars will come down to driver skill.

Shelby GT500 Mustang Joins In
After watching the 2015 Corvette Z06 and the 2015 Challenger SRT Hellcat trade wins for the first few minutes of this video, a 2014 Ford Shelby GT500 Mustang joins in the fun to take a shot at the blown Challenger. The 2014 GT500 has a supercharged V8 with 662 horsepower and 650lb-ft of torque, so it is quite a bit less powerful than the Challenger Hellcat, but the Mustang is quite a bit lighter, so before we see this race there is a chance that the Shelby Mustang could outrun the more powerful Mopar.

That chance slips away quickly when the first race between the Hellcat Challenger and the GT500 Mustang begins, as the Dodge instantly shoots out ahead of the Ford. Even though the Mustang appears to stay in the throttle, the Challenger continues to easily walk away from the blown pony, but the video then states that the Mustang had traction problems. He stops to let some air out of his tires with the hopes of improved traction and the two head back out onto the road for another shot at the Hellcat.

On the second run, the Mustang and Challenger were staying side by side through the first few gears, before they both slam on the brakes as they pass a cop. The Mustang didn’t stick around, so we don’t get to see these two muscle cars square off again – leaving just that one beating (which was blamed on traction problems) as the best example of a GT50 racing a Hellcat Challenger.

So, as a result of this video, Corvette fans are insisting that this is proof that the new Z06 is the superior car, while Mopar fans are pointing out that across the different videos online, the Challenger is winning more often than not.

Austin H. wrote on February 13, 2015 - 11:21pm Permalink
Horrible video title...
Bubba wrote on February 15, 2015 - 6:50pm Permalink
Where do you come up with "crushes Mustang GT500"? The GT500 was clearly inching away on the final run, and the video clearly stated he spun badly on the previous run. Going by either rated or RWHP numbers from a Dynojet, the power to weight ratio is better in the GT500, too.
Lol wrote on February 24, 2015 - 2:01pm Permalink
Then the gt500 adjusts the tire pressure and the story changes. Selective journalism moron
Snuwfer wrote on March 15, 2015 - 10:53pm Permalink
butthurt ford boys, i love it.
Austin H. wrote on March 17, 2015 - 12:47am Permalink
Meh, not necessarily... The power to weight ratio argument is a good one. When/if we ever see a good video of a stock 14' GT500 v stock 15' Hellcat, it should settle and debate. I'm not talking adjusting tire pressures, or slapping slicks on either. Just straight off the lot... Would be cool to see how close they are from a dig, then a few pulls on the highway. Since neither of them would really have any opportunity to hit the 200mph mark, it would be interesting to see which has the advantage just screwing around stop light to stop light or on the highway... I'd venture to say that they are so close it would all come down to the driver, unless we get two automatics lined up. =)
Kay wrote on April 29, 2015 - 10:37pm Permalink
Not certain I saw the crushing of the GT500, kinda misleading don't you think.
Hector wrote on June 8, 2015 - 12:52pm Permalink
What video did you watch? GT500 never got "crushed". Totally misleading.