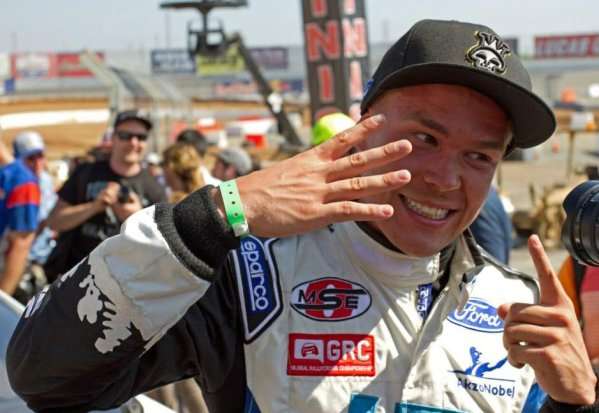 Toomas “Topi” Heikkinen and the rest of the Global RallyCross field takes to Atlanta Georgia this weekend with Heikkinen having a very real chance of locking up the 2013 points championship but 11 other drivers will hit the track in HotLanta to try to keep the Finn from grabbing the championship without a fight.
Advertisement

Topi Heikkinen has been an unstoppable force this season in the world of Global RallyCross.  After finishing 2nd at the Brazil X Games and 3rd in the 1st race of the Munich X Games, Topi has reeled off four straight wins to take a commanding lead in the 2013 GRC championship run.  Winning four races in a row is an impressive move but what has been even more impressive is the fact that Heikkinen has won those four races with no real competition.  Topi hasn’t just won the races – he has slaughtered the field in every event.  Now, with three events left on the 2013 GRC schedule (Atlanta Georgia, Charlotte North Carolina, Las Vegas Nevada), Topi doesn’t have to do all that much to take home the championship but a 5th straight win would secure his title.

If Topi Heikkinen wins his 5th straight Global RallyCross this weekend in Atlanta along with winning his heat race, he will come out of Georgia with 138 points.  Provided that Tanner Foust finishes 2nd in Atlanta and wins his heat race – along with winning the final 2 events of the season including the heats in those races – he would also have 138 points.  That means that if Heikkinen wins in Atlanta, he only has to show up to the events in Charlotte and Las Vegas to claim the title.

Even if Tanner Foust wins in Atlanta, Charlotte and Lax Vegas including each of his heat races at the final 3 events, Topi only has to finish an average of 8th place in those three events to still win the 2013 Global RallyCross championship.  In other words, the odds are pretty good that the young Ford Fiesta driver will win the 2013 GRC championship just one season after a horrific crash at the 2012 Los Angeles X Games put him out for the season.

Along with OlsbergsMSE teammates Topi Heikkinen and Tanner Foust, 10 other drivers will hit the track in Atlanta.  Topi and Tanner are joined by their other two teammates Brian Deegan and Patrik Sandell along with OMSE2 Ford Fiesta drivers Scott Speed and Steve Arpin.  The 7th Ford in the event is rally superstar Ken Block.  Joining all of those Fords are the three Subaru entries piloted once again by Bucky Lasek, Dave Mirra and Sverre Isachsen.  There will be 2 Dodge Dart teams but neither of them will be piloted by their regular drivers as Travis Pastrana #199 car is once again being driven by Timur Timerzyanov while Bryce Menzies’ #99 Dart will be driven by World Rally Championship champ Henning Solberg.  Once again, Liam Doran will surprisingly not participate in the Atlanta race.

While Heikkinen has almost secured the top spot in the 2013 GRC championship race, Tanner Foust finds himself locked in a fairly tight four car battle with Brian Deegan (6 points back), Ken Block (8 back) and Patrik Sandell (9 back).  You might have noticed that all of those drivers mentioned above from Heikkinen in 1st to Sandell in 5th are all Ford Fiesta drivers.  Liam Doran is 6th in points in his Mini but with Scott Speed and Steve Arpin both only being a handful of points behind Doran – there is a very real chance that Ford drivers could claim the top seven spots in the final standings.   That would be quite an impressive feature in Ford Racing’s hat and right now, it looks like that is going to happen although Sverre Isachsen in his Subaru WRX could spoil that fun for Ford as he is currently tied with Arpin and Sverre has been hot in the past few events.

The Atlanta Global RallyCross race will run at 6:30pm EST this Saturday and you can catch the action on ESPN2.  Even though Topi has killed everyone this year, this season has still been packed full of high adrenaline racing action that will most certainly continue this weekend.

LG's New EV Battery Plant Is a Welcome News for Tesla
Tesla Giga Berlin's New Hurdle: It's Not Only the Gov't, but Now Tesla Itself
END_OF_DOCUMENT_TOKEN_TO_BE_REPLACED