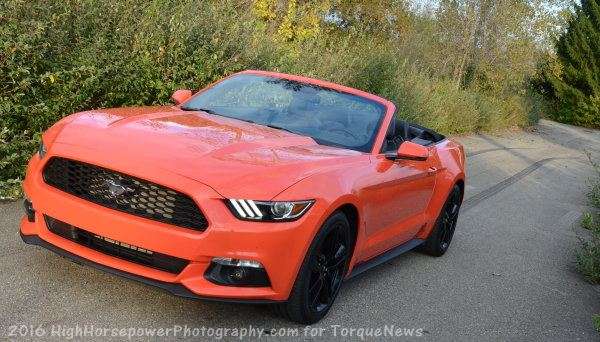 On this day 52 years ago, more than 22,000 people had purchased the new Ford Mustang which had been formally introduced at the World’s Fair on April 17th, 1964 – marking the start of the longest-running car and one of the most famous American cars in the history of the industry.
Advertisement

The Ford Mustang was formally introduced on Friday, April 17th, 1964 at the New York World’s Fair, but the new sports car also debuted at dealerships around the country on that same day. Unlike the modern auto industry, where a car might be introduced a year or more ahead of going on sale, Ford had a huge spread of Mustangs available all around the country ahead of the big debut in New York. This allowed the automaker to roll out their new car where it would get the most media attention and when people heard about this new sports car – they could run right to their local dealership to buy one.

The plan worked better than expected, as by the time the Mustang was covered the next morning in more than 2,600 newspapers around the country, Ford had already sold more than 22,000 Mustangs.

While the auto industry has obviously changed a tremendous amount in the last 52 years, the Mustang’s first day sales of 22,000 units is nothing short of remarkable. Over the next 12 months of sales, Ford sold 417,000 examples the 1964.5 and 1965 Mustang, leading to a monthly average of 34,750 new pony cars sold each month. For comparison, during the 2015 calendar year, which was very strong, the Mustang’s best month came in May with 13,616 units sold.

America’s Longest Running Sports Car
While the Ford Mustang is not the oldest nameplate in the American auto industry, the Mustang’s 52 straight years of production makes it the longest running sports car (and car in general). Corvette owners will point out that the famed GM sports car came first, but there were no 1983 Corvettes sold and that small gap gives the Mustang the edge.

The best year for the Ford Mustang came in 1966, when there were 607,568 units sold and the worst sales year came in 2009, when just 46,619 Mustangs left dealerships. In the 52 years of sales, the Mustang has only dipped below 100,000 units 7 times, averaging 185,193 units per year. It should be noted that the average annual Mustang sales figure is very high due to the years when the Mustang was the only show in town, so the modern numbers are generally below that average.

In the last 52 years, the Mustang has been the bestselling sports car in America in 41 model years. 2016 will almost certainly make it #42, as the 2016 Mustang continues to comfortably outsell the competition.

tommy wrote on April 18, 2016 - 5:24pm Permalink
Someone doesn't know what a sports car is. If it has more that 2 seats it is a Sporty car or a GT car but not a sports car. Also you might check on the length of time Chevrolet has been producing The Corvette. I believe they started around 1953.