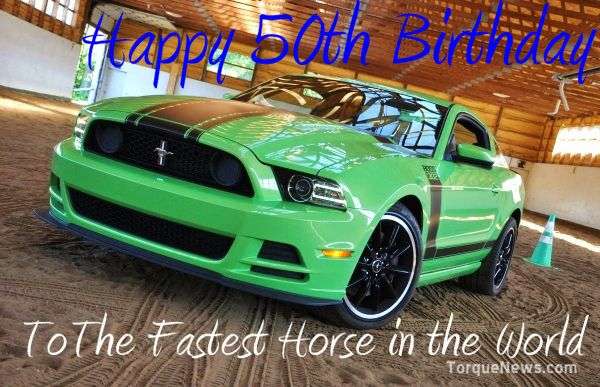 The first Ford Mustang was introduced on April 17th 1964 at the New York World’s Fair so with the arrival of April 17th 2014, the mighty Mustang has officially turned 50 years old – making it the longest running nameplate for a car in the US auto industry.
Advertisement

A great many cars, trucks and utility vehicles of all shapes and sizes have come and gone in the past 50 years, but the one constant across that span of time was the mighty Ford Mustang. While hardcore performance car guys like Carroll Shelby considered the early Mustang a “secretary’s car”, the small Ford coupe and convertible quickly became the most popular car sold in America. Ford received orders for more than 22,000 cars on the first day the Mustang was available and in the first 12 months of sales, the Mustang moved more than 417,000 units. Sales would climb to record numbers in 1966 when Ford sold more than 607,000 Mustangs and while the Mustang sales numbers are nothing like they once were – the Ford Mustang has routinely been among the bestselling performance cars in the American market.

Power numbers would continue to climb for the Ford Mustang through the early years, with the introduction of the big block V8s taking the Mustang up to 335 in 1967 and 1968 while the Boss 429 took the Mustang to record power numbers for those days, with 376 horsepower in 1969 and 1970. 1971 would be the final year for those big block engines and over the next few decades, power numbers would dwindle due to increasing emission and fuel economy requirements with the 1974 Mustang coming with only 105 horsepower, a year in which there was no V8 option.

As for the new 2015 Ford Mustang GT, the 5.0L V8 packed under the hood is the most powerful non-special edition Mustang ever with “at least” 420 horsepower. In the past, no Ford Mustang has offered as much power as the modern Mustang GT – not the 1969 Boss 429, not the 2000 Mustang Cobra R, not even the mighty Terminator Cobra of 2003 and 2004. With the exception of the ultra high performance Shelby Mustangs that were introduced for the 2007 model year, no other Ford Mustang has ever offered power like the 2015 Mustang GT and never in the Mustang’s history has any version offered this kind of power without a supercharger.

In other words, the 2015 Ford Mustang will be the most powerful and the most efficient Mustang ever while also being packed full of modern technology inside and out – making the introduction of the new S550 Mustang a fitting way for Ford Motor Company to celebrate the 50th birthday of America’s longest running and most popular car of all time.

From everyone here at TorqueNews.com, congratulations to the Ford Mustang on hitting this legendary milestone. Here’s to another 50 years of high performance driving excitement!

Elf Odin wrote on April 17, 2014 - 3:58pm Permalink
"the mighty Mustang has officially turned 50 years old – making it the longest running nameplate for a car in the US auto industry" The Chevrolet Corvette has been in production since 1953, 11 years longer than the Mustang has been sold.
Patrick Rall wrote on April 17, 2014 - 5:50pm Permalink
Incorrect. There was no 1983 Corvette. The Mustang has never missed a model year. The Corvette has been in production for more years but not continuously.
sinfulta wrote on April 18, 2014 - 2:51pm Permalink
Actually there was 44 1983 Corvettes built. But due to quality issues they halted production. They said the longest running nameplate. Not production anyways. So Either way the statement is still wrong.