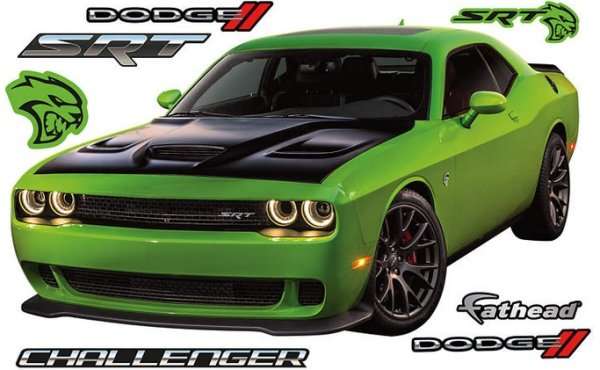 Hang a Huge High Res Dodge Challenger, Charger or Viper on Your Wall

The well-known wall art company Fatheads has rolled out a new lineup of Dodge brand items, including huge, high resolution wall decals of the Dodge Viper, the Dodge Challenger SRT Hellcat, the Dodge Charger R/T Scat Pack, a handful of other vehicles and a wide array of modern Dodge badges – all of which are ready to be safety stuck to your wall in style.
Advertisement

The Fatheads brand is best known for their life size wall art decals depicting famous athletes along with items like huge football helmets or team logos, but with their newest additions to the product line – you can now buy a handful of different Dodge vehicles and logos to hang on your wall. Like the life-size athlete decals, the new Dodge vehicle Fathead decals can be safely applied to a wall, removed and applied to another wall without leaving any permanent marks, so these are ideal for a kid’s bedroom, a guy’s man cave or the wall of your favorite car girl’s garage.

Dodge Fatheads
The new Dodge Fathead lineup is very extensive, but the highlights of the new catalog pages are the massive vehicle decals.

The 2016 Challenger Hellcat, the 2016 Charger Scat Pack, the 2007 Charger Super Bee and the 2016 Viper are the largest of the group – all measuring at least 7 feet wide – while the Sublime Hellcat Challenger and the two 100th Anniversary cars are slightly under 7 feet wide. Each of the vehicle Fatheads has an MSRP of $89.99 and while the large cars are the focus of the package, each car comes with a handful of small (yet still quite large) decals that relate to the vehicle in question.

Finally, if putting a 7 foot wide Viper, Challenger or Charger on your wall seems like a bit too much – or if you don’t have the wall space – you can opt for one of the smaller Dodge-themed Fatheads. In addition to the vehicle packages, Fatheads offers the Hellcat head logo, the Dodge font logo with hashmarks, just the Dodge hashmarks (no font), the Dodge Scat Pack logo – most of which also come with accessory decals. There is even a package with 13 different Dodge brand decals for $79.99 which includes a little bit of everything, such as the Viper hood badge, the Hellcat head, the Dodge hashmarks, some SRT badges and more.

Click here to check out the entire Dodge Fathead lineup!