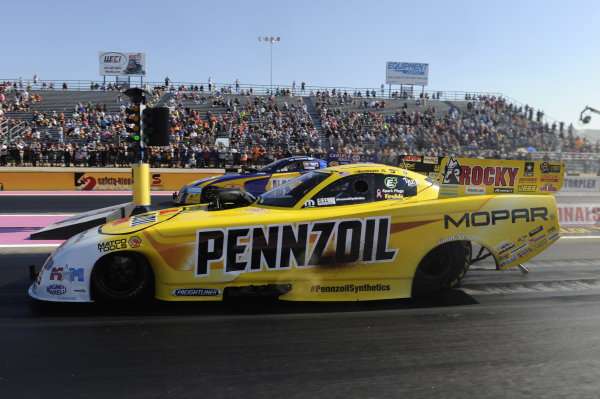 The AAA Texas NHRA Fall Nationals were held this past weekend and for the 3rd race in a row, the final round was a duel of Dodge Charger funny cars from Don Schumacher Racing, with Matt Hagan beating teammate Ron Capps – giving Hagan his 4th win of the season, DSR its 13th race of the season and nearly guaranteeing another funny car championship in 2016.
Advertisement

The 2016 Mello Yello Drag Racing season didn’t start off as well as the 2015 season for the Dodge Charger funny car teams from Don Schumacher Racing, but after struggling in the Countdown to the Championship last season – the DSR Chargers are dominating the 6-race shootout for the 2016 title. The AAA Texas NHRA Fall Nationals was the 4th event of the Countdown and for the 3rd time, it was a Dodge versus Dodge battle for the win. In the 4 final rounds of the championship battle, 7 of the 8 competitors have been in a Dodge Charger.

Qualifying
The DSR Dodge Charger funny cars came out flying in Texas, with Ron Capps setting a track ET record of 3.864 @ 322.96mph on his first qualifying run, allowing him to claim the top spot right out of the gate. Also in that 1st round, Hagan, Beckman and Johnson were 5th, 6th and 7th quickest in the 17 car field. It was a quick field, too, with 11 cars running in the 3-second range in that 1st round.

In round 2, Beckman, Hagan and Johnson all turned quicker times, but while Capps had a solid run (3.88), he was quicker on his 1st run. As a result, Capps fell to the 7th spot while Beckman moved to 2nd, Johnson moved to 3rd and Hagan moved to 4th. Robert Hight’s Camaro was the quickest funny car after round 2 with a run of 3.839 @ 332.02mph.

In the 3rd and 4th rounds, almost every car in the funny car field went slower so the order didn’t change at the top, allowing Robert Hight and his Chevrolet Camaro to secure the top qualifying spot. Beckman was 2nd, Johnson was 3rd, Hagan was 4th, Courtney Force was 5th, Del Worsham was 6th, Ron Capps was 7th and John Force rounded out the top half of the bracket in 8th.

Eliminations
In the 1st round of eliminations, every “favored” car took the win except for #8 John Force, meaning that all four of the DSR Dodge Chargers moved on, along with the Toyotas of Del Worsham and Alexis DeJoria and the Camaros of Courtney Force and top qualifier Robert Hight.

In round #2, Matt Hagan beat Courtney Force, Ron Capps beat Jack Beckman, Robert Hight beat DeJoria and Del Worsham beat Tommy Johnson Jr – setting up a Dodge-Chevy battle in one half of the semifinals and a Dodge-Toyota battle in the other half.

Matt Hagan took on Hight’s Camaro and after a slight starting line advantage, Hagan ran a strong time of 3.899 while Hight ran into problems and coasted through with a 4.68. Ron Capps also grabbed a starting line advantage over Del Worsham and he needed it, as the Toyota went a little quicker, but lost to the Dodge.

Unfortunately for Ron Capps, Hagan grabbed the starting line advantage (.038 to .064) and while Capps went a little quicker – running a 3.906 to Hagan’s 3.913 – the starting line advantage was too big to overcome. Hagan took his 4th win of the 2016 season, putting him in a better position for the final 2 rounds of the Countdown to the Championship.

Championship Standings
With just two events left in the 2016 Mello Yello Drag Racing season, Ron Capps holds the top spot in the funny car championship run by a margin of 64 points over Tommy Johnson Jr. Matt Hagan is 88 points back in 3rd and Jack Beckman is 4th, 131 points behind Capps. In other words, the Don Schumacher Racing Dodge Charger teams hold the top four spots in the championship chase with just two races left, with the 2015 champion Del Worsham sitting in 5th, 145 points back.

While the NHRA points system is a bit on the intricate side, the bottom line is that winning an event gets the driver 100 points. They also get points based on their qualifying position and drivers can earn bonus points for being the quickest cars in each round of elimination, or for setting national records, but compared to the 100 points for winning the race – the other numbers are minimal.

In any case, if Del Worsham was to win the final two events of the season, figure that he stands to earn around 220 points, if not more. 220 points would allow Del to catch Ron Capps based on his current point total, but if Capps can make it to the 2nd round in each of the final two events – Worsham will not be able to catch the Dodge regardless of how well the Toyota finishes.

In short, it is looking like an NHRA funny car championship is all but a lock at this point for one of the Dodge Charger teams from Don Schumacher Racing.