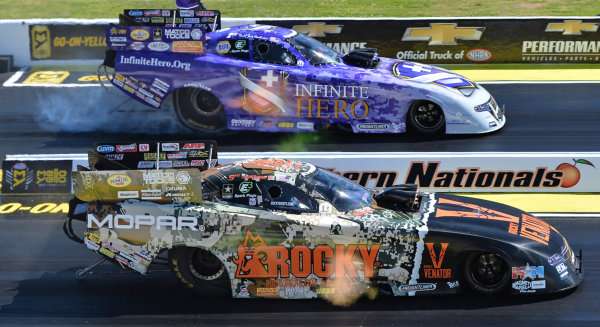 Matt Hagan, Don Schumacher Racing and their fleet of Dodge Charger race cars have had a rough 2016 season when compared to 2015, but when the final win light popped this weekend in Atlanta, Hagan beat teammate Jack Beckman for his first win of the year.
Advertisement

After Ron Capps opened the 2016 Mello Yello NHRA Drag Racing season with a win back in February, Don Schumacher and his quartet of Dodge Charger R/T funny cars have been shut out – watching Ford, Chevrolet and Toyota teams win five straight races following the season intro. After six races in 2015, DSR Charger funny cars had won five of them, but headed into the 7th race of the 2016 season, Capps win at the beginning of the season was their only win. In fact, the only time a Dodge Charger had made it to the final round other than Capps’ opening win was in the third event of the season, when Capps broke at the starting line and handed the win to Robert Hight and his Camaro.

In short, 2016 has been a rough season for the Don Schumacher Charger funny cars, but with a long season ahead, all four teams headed into Atlanta for the 7th race of the season with high hopes – and those high hopes would be rewarded.

Qualifying
The DSR Dodge Charger funny cars had a shaky first round of qualifying, with the four team cars turning in the 6th through 9th positions while Camaros, Mustangs and Camrys ruled the round. That changed in round 2, when Jack Beckman and Matt Hagan laid down smokin’ fast runs to grab the top two spots.

Come the 3rd and 4th rounds of qualifying, times had dropped into the 4 second range across most of the funny car field, allowing Beckman and Hagan to hang onto the top two spots with their round 2 times, but Tommy Johnson Jr was able to climb up into the 5th spot before qualifying came to an end. Ron Capps was forced to settle for the 8th spot and non-DSR Charger driver John Hale qualified 12th.

Eliminations
In the first round of eliminations, Jack Beckman and Matt Hagan turned in the quickest runs, with Beckman beating Jim Campbell and Hagan beating Chad Head. Tommy Johnson Jr also turned in a strong run as he beat John Hale while Ron Capps advanced to the second round by beating John Force.

In round 2, Beckman slowed a bit, but he was still able to beat teammate Ron Capps. Tommy Johnson Jr beat Alexis DeJoria and with the quickest run of the round, Hagan beat Del Worsham. Also, Courtney Force and Robert Hight went head to head in their Camaros and Force took the win when Hight had issues. This sent three Dodge Chargers and a Chevrolet Camaro into the funny car final four.

First up, Fast Jack Beckman knocked out Tommy Johnson Jr and on the other side of the bracket, Hagan ran the quickest time of the round to beat Courtney Force – setting up the second all-Mopar final of the 2016 season.

Finals
In the final round, the Infinite Heroes Dodge Charger R/T of Fast Jack Beckman took on the Pennzoil Dodge Charger R/T of Matt Hagan. Hagan got out first with a slight starting line advantage and when Beckman’s rear tires went up in smoke – Matt Hagan got an easy pass to his first win of the 2016 season. Hagan ran into engine troubles as he went through the traps, which will cost him 10 championship points and $2,000 for his second oildown of the season, but that doesn’t change the fact that the former champ secured his first win of the season.

LG's New EV Battery Plant Is a Welcome News for Tesla
Tesla Giga Berlin's New Hurdle: It's Not Only the Gov't, but Now Tesla Itself
END_OF_DOCUMENT_TOKEN_TO_BE_REPLACED