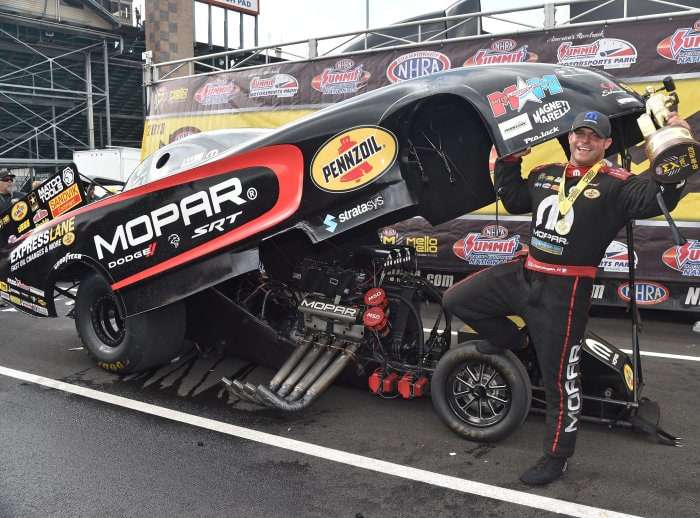 Matt Hagan and his Dodge Charger got win #2 on the season this past weekend in Norwalk, Ohio, beating current series leader Courtney Force and her Camaro in the final round after knocking off two of his three Don Schumacher Racing teammates in the early rounds.
Advertisement

It has not been a great season for Matt Hagan and his other Dodge Charger-driving teammates from Don Schumacher Racing. After the 11th event of the season – in which Ron Capps got his first win on the year – the DSR funny cars had only mustered three wins and a couple of second-place finishes. For comparison, DSR Chargers won ten of the first eleven races last year and six of the first eleven in both 2015 and 2016, so three wins in eleven races to start the 2018 season is disappointing for Team Mopar.

Fortunately, things got a little brighter in Norwalk, with Matt Hagan taking the win in his Dodge Charger, beating rival Courtney Force and her Camaro – giving Don Schumacher Racing its second-straight win for the first time this year.

Short Qualifying
Due to the crummy weather this past weekend in Ohio, the NHRA funny cars were restricted to just two rounds of qualifying rather than the normal four. Many drivers came off of the trailer fast, with each of the top seven qualifiers laying down their quickest run in the first round.

The other two Don Schumacher drivers – Jack Beckman and Tommy Johnson Jr. – were 11th and 14th.

In the second round, Hagan had to face and beat another teammate, knocking off Jack Beckman while Ron Capps lost to the Toyota of JR Todd. Meanwhile, John Force beat Robert Hight and Courtney Force took down Shawn Langdon – setting up a father-daughter battle in the semifinals.

Courtney pulled a better light and run the quicker time, beating dad and advancing to the finals while Matt Hagan stamped his ticket to the finals with one of the quickest runs of eliminations, beating JR Todd and his Camry.

In the final round, Matt Hagan and his Dodge Charger pulled a huge starting line advantage over Courtney Force and her Camaro (.033 to .067), and he pulled away when the Chevy ran into traction troubles – running a 4.094 to Force’s 4.22. You can watch the final run in the video below.

That gave Hagan his second win of the season while being Courtney Force’s fourth final-round loss. She has also won in the final round four times this season, so out of 12 races, she has been in the finals eight times – and that is a big reason why she holds a commanding lead in the championship standings.

Championship Standings
To be exact, Courtney Force holds a 250 point lead at the halfway point of the season, with Matt Hagan and Jack Beckman tied for that second spot. Force’s teammate Robert Hight is fourth (267 points back) and Toyota driver JR Todd rounds out the top five (271 points back). Ron Capps is sixth, Tommy Johnson Jr is seventh and John Force is eighth, so right now, all of the John Force Racing and Don Schumacher Racing drivers are in the hunt for the funny car title.