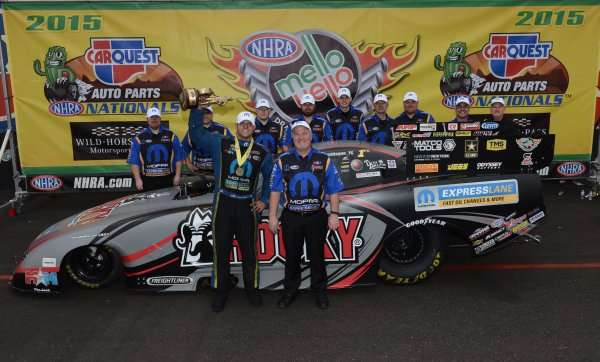 Matt Hagan brought his 2015 Dodge Charger funny car into the Carquest Nationals in Phoenix Arizona looking to back up his season opening win in Pomona and the champ didn’t disappoint – winning every single round with a better reaction time and an awesome time.
Advertisement

After taking his 2015 Dodge Charger to the top of the funny car ladder at the NHRA season opener in Pomona California, Matt Hagan and Don Schumacher Racing came into the second event of the season looking to go two for two. Hagan once again proved to be the fastest driver, pulling a better reaction time in every single round of eliminations while also putting down four straight fast runs – including turning the 5th quickest elapsed time in the NHRA funny car class, ever.

Qualifying
Matt Hagan brought his Rocky Dodge Charger out to Phoenix and was fast right off of the trailer, turning a 4.025 ET at 316.6mph and setting the bar high in round 1 of qualifying. The Make-A-Wish Dodge Charger of Tommy Johnson Jr was 3rd after round 1, while Ron Capps’ Charger was 5th, Shane Westerfield’s Charger was 9th, John Hale’s Charger was 11th and Jack Beckman was 14th.

In round 2, Hagan didn’t go quicker, but Courtney Force, Alexis DeJoria and Del Worsham all went much faster, pushing Hagan’s Charger from 1st to 4th after the second round of qualifying. Also, none of the Dodge Charger funny cars turned a faster pass in round 2, so in addition to Hagan dropping to 4th, Johnson dropped to 6th, Capps dropped to 10th, Westerfield dropped to 13th, Hale dropped to 14th and Beckman dropped to 16th (last).

In round 3, Jack Beckman got things started right for the Dodge Charger teams, making his first solid pass of the weekend and propelling himself into the field with a 4.047. John Hale was the next to make a strong run with a 4.194 and Tommy Johnson Jr ran a very fast 4.003 to move up into the 3rd spot, while Capps and Hagan both ran slower times than their previous best. This meant that after the third round of qualifying runs, Johnson was 3rd, Hagan was 5th, Beckman was 7th, Capps was 11th, Hale was 14th and Westerfield was on the outside looking in at 17th.

Heading into the finals, Hagan was in the top spot, Johnson was 5th, Capps was 6th, Beckman was 12th, Hale was 14th and Westerfield was 15th in his first series start.

Eliminations
Unfortunately, while qualifying ended well for the Dodge Charger teams, eliminations didn’t start off very well, with Ron Capps losing traction and losing the first run to the Camry of Chad Head. Tommy Johnson Jr then knocked out Jack Beckman with a good side by side race, John Hale lost to Del Worsham’s Camry, Shane Westerfield redlit and handed the race to Courtney Force and Matt Hagan crushed the Toyota Solara of Jeff Diehl. With Capps, Beckman, Hale and Westerfield out, it was up to Tommy Johnson Jr and Matt Hagan to carry on the Mopar flag.

In round two, Johnson handed away a starting line advantage when engine problems hit and lost to Alexis DeJoria, but Matt Hagan took a starting line advantage and piled on a quicker time to beat the Camry of Cruz Pedregon to advance to the final four.
In round three, Hagan once again pulled the big hole shot against Alexis DeJoria, but it turned into a beating when DeJoria’s Camry lost an engine. Hagan still ran a 4.027 to head to the finals. In the other half of the ladder, Del Worsham ran a 4.010 and overcome a starting line disadvantage to beat Robert Hight’s Camaro.

In the finals, Matt Hagan’s Dodge Charger funny car through down with the quickest run of the elimination rounds, running a 3.975 at 324.83 miles per hour after pulling a hole shot over Worsham’s Toyota. Worsham backed up his round three 4.010, but Hagan’s lightning quick run was enough to grab his second win in the 2015 NHRA season.

Hagan Leads the Championship Run Early
After his second straight dominating performance of the young 2015 NHRA season, Matt Hagan and his 2015 Dodge Charger sit in first place in the funny car championship run, leading 2nd place Del Worsham by 58 points. Ron Capps is 4th in points (102 back of Hagan), Tommy Johnson Jr is 6th (-113) and John Hale is tied for 9th (-149).

The next stop on the 2015 NHRA schedule is the Gatornationals, starting on March 12th in Gainesville, Florida.