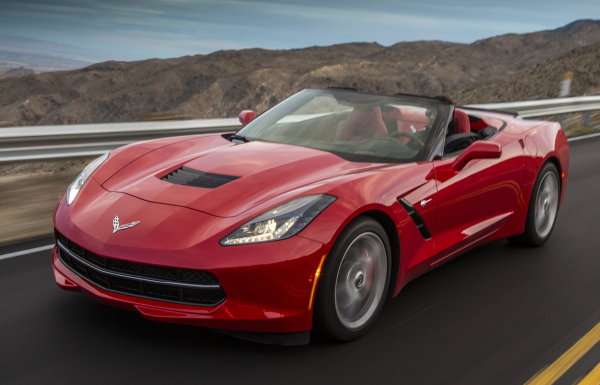 The seemingly endless stream of General Motors recalls has brought about a notice for the 2014 Chevrolet Corvette Stingray over a concern that the rear shock absorbers could crack and fail altogether – or simply reduce the life of the suspension components – so the company is getting these sports cars back to the dealerships for repairs.
Advertisement

This newest General Motors recall pertains to 1,939 2014 Chevrolet Corvette Fastbacks and Convertibles in the US market, plus another 33 in Canada and 82 in markets outside of North America for a total of 2,054 recalled Corvettes around the world. These Corvettes have been fitted with rear shock absorbers that the automaker is concerned might have an insufficiently strong weld somewhere in the construction of the piece…although it is unclear where this troublesome weld is found on the shock absorber itself.

This 2014 Corvette Stingray recall mentions that the problem affects models with both FE1 and FE3 suspension systems. FE1 is the standard suspension setup in the 2014 Corvette Stingray and FE3 is the Z51 suspension package so it seems that no models are “safe”, but the relatively low number of Corvettes included in this recall relative to the number of new Stingrays sold in the suggests that these shocks were all installed during specific production run.

The Impact of the Problematic Weld
While General Motors hasn’t offered up a world of details on the actual mechanical problem at fault for this recall, we know that any sort of failing weld in the suspension system of the 2014 Chevrolet Corvette Stingray can be dangerous to the occupants of the C7 and the others on the road around them. GM has explained that this weld can cause a fracture in the shock assembly which would cause an instant failure of the shock and in a best case situation, the low quality welds could cause the shocks to wear out quicker than normal.

The good thing about the problem causing this 2014 Chevrolet Corvette Stingray is that when the shock absorber fails, the vehicle won’t become dramatically more dangerous. Even if the shock lost total internal pressure, it would definitely impact handling in a very big way, but the car could still be driven carefully or at least pulled to the side of the road. Where this could play a dangerous role is if the shock or shocks fail when the Corvette is being raced, as having the rear suspension fail at high speed on a race track could make it much more difficult to make that next tight turn. It could also prove to be a huge headache if you have taken your Stingray on a long road trip only to have the rear suspension give out when you are far from home.

The Fix is Straightforward
The good news is that fixing this newest problem with the 2014 Chevrolet Corvette Stingray is pretty straightforward. Once owners have received the recall notice in the mail and they have taken their Corvette to the dealership for repairs, both rear shock absorbers will be replaced free of charge and in their place will be new shocks that don’t have a problematic weld. This will ensure that the rear suspension will stand up to the rigors of sports car driving and it will do so for years to come.

Best of all, there are no reports of accidents or injuries stemming from this 2014 Corvette rear suspension system problem so GM is recalling the cars and fixing the problems before the concern turns into a real safety issue. It might be inconvenient for Corvette owners to make another visit to the dealership, but it is much better for the automaker to recall the cars before anything proves to be truly wrong – especially through an accident that could hurt people.