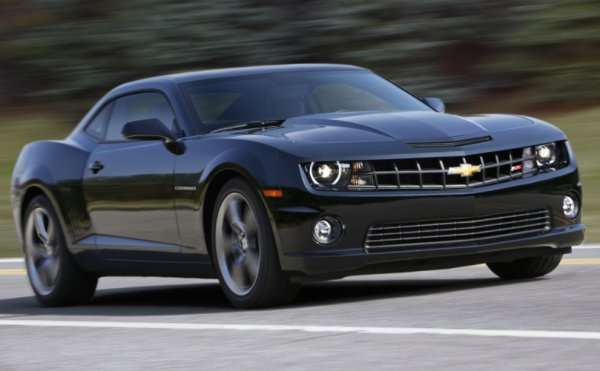 General Motors has issued yet another recall for the Chevrolet Camaro, this time recalling 2011 and 2012 models with the power adjustable front seats over a concern that the height setting feature could fail and allow the seat to move up and down freely – a problem which impacts more than just the Camaro.
Advertisement

While the Chevrolet Camaro was the big talk a few weeks back when General Motors announced a recall of every 5th gen model made from 2010 through the current models, the newest recall for the sleek muscle car is far more serious. Although the switchblade key fob recall can pose some risk it is minimal at best and a careful driver can remove any chance of running into a problem with their Camaro. However, this newest recall announced on July 23rd could be far more dangerous as the adjustable seat mechanism could fail, leaving the seat to move up and down as you hit bumps.

The Adjustable Seat Recall Explained
The newest batch of recalls includes notices for over 717,000 vehicles, but “only” 414,333 of them are affected by the same recall as the 2011-2012 Chevrolet Camaro. Along with the Camaro this recall reaches the 2010-2012 Chevrolet Equinox, the 2010-2012 GMC Terrain, the 2011-2012 Buick Regal, the 2011-2012 Buick LaCrosse and the 2010-2012 Cadillac SRX. General Motors hasn’t offered specific breakdowns by model or by model year, but we know that those vehicles listed above, when fitted with the optional power adjustable seats, could have a bolt within the adjustable height assembly that could loosen and fall off of the assembly without any notice. When that bolt fails, the adjustable height aspect of the driver and front passenger seat is no longer under the control of the button, meaning that it can move up and down on its own.

Doesn’t sound like much of a problem? Imagine that your 5’1” wife is cruising along the highway at 75 miles per hour in your 2012 Camaro SS. Being that short, she would likely have the seat height jacked way up so that she has the best view of the road possible…when suddenly the driver’s seat slams down into its lowest position. Not only is she distracted by the sudden motion, but she is now unable to see the road and other vehicles around here as clearly as she would like. While still moving along in highway traffic, she frantically tries to raise the seat back up – but it is no use.

That is an extreme example, but it illustrates why GM needed to recall these vehicles to make sure that the height adjusting bolt is properly tightened. It should be noted that there has been one crash and three injuries as a result of this problem, but the automaker didn’t specify which vehicle was involved in that crash.

These Vehicles are Safe to Drive – Just Don’t Adjust the Seat Height
General Motors has pointed out that this problem does not make the vehicles on the recall list unsafe to drive, but owners should avoid adjusting the height of the front seats until the internal workings of the seat have been inspected to ensure that the bolt is tight. In other words, if you are the only person who drives your 2011-2012 Camaro and you never play with the seat height adjustment, it is far less likely that you will run into any issues so you can keep on driving your GM muscle car without much concern – but once the recall letter hits your mailbox, I would make sure to get the problem addressed quickly just in case.

Fortunately, this recall has a very cut and dry problem – with a similarly simple fix. Whether you have a Camaro, a Regal, a LaCrosse or any of the three SUVs on the recall list, the repair for this recall is as simple as the technician checking the height adjustment bolt and, if necessary, replacing it with a new bolt that wont loosen up.

BRENDA DRINNON wrote on April 30, 2016 - 11:33am Permalink
YES MY DRIVERS SEAT GET STUCK WONT MOVE THE BACK FORWARD OR BACK JUST SITS AND CLICKS WOULD THAT BE PART OF THE RECALL ITS A 2010 GREEN CAMARO
Carol A wood wrote on January 30, 2021 - 8:14pm Permalink
My 2010 camero has did the same it is stuck want move and the heated seats stopped working.
Steven Wayne Norris wrote on July 7, 2016 - 3:07pm Permalink
My passenger seat has never gave me any trouble until now. I pushed the button to make the back of the seat to move full forward. Now it won't go back. Can't even move it back manually .
Rachel wrote on October 9, 2016 - 5:13pm Permalink
I have the same problem how did you fix it
Steve Norris wrote on October 10, 2016 - 4:54pm Permalink
The problem is the seat has a limiter switch that deactivates the adjustment button on the seat when the seat has been moved forward to far. It ( limiter switch ) should stop the forward action from going to far but what it does is cut the power to the seat. I had to remove the seat which is held by two bolts at the front of the seat. There is one major electric plug you have to unplug for removal. Back of seat has two zippers so access can be achieved. Two wires from the motor in back of seat will move seat back to normal position by hooking a 12 volt battery charger to wires. Doesn't matter which wire red or black connects to. All that will happen is either the seat back will start moving back if not change connection to wires going to seat motor. This action is only doing what the seat switch should be doing but power has been cut cause of the limiter switch. Once seat has returned to standard position switch will start back working again. Just a flaw in design with the limiter switch, it will be fine just remember in the future to not let forward recline go to far forward. Would be a good idea to just use the manual pull located topside back of seat. I hope this will help, if need to you tube can be helpful with disconnecting the seat just type what you need help with. Good Luck
Dave wrote on July 11, 2017 - 6:31am Permalink
Steve Norris Thank you very much for the info, i currently have my passenger seat back -unzipped and ready o attempt your fix-mine is ALL the way fwd due to the attempt to get the switch working to go back, so that limiter must be close to upright,..because it moved fwd quite a bit still....I will hook 12v to the motor in back of seat with out taking out-fingers crossed. TY
Allegre Atkins wrote on October 6, 2017 - 5:29pm Permalink
The driver's seat will recline backwards, but when you press the button for it to recline forward nothing happens. All the other buttons work for the height adjustment and to move the seat the seat to the front or back. Is that in the recall?
melinda wrote on May 14, 2018 - 3:13pm Permalink
2012 camaro ss both my passenger and drivers seats reclining will not move. they will go back but not front. help please...
Perry Smith wrote on May 6, 2020 - 7:27am Permalink
My 2011 Camaro ss driver seat does not move forward nor backwards it doesn't move up or down it's just in one position
Joyce Ashtin wrote on January 12, 2019 - 1:23am Permalink
My 2012 Chevy camero seat want come back up it has reclined almost all the way back, what can I do? ...
Lucy wrote on October 10, 2017 - 3:40pm Permalink
Took my car in for the recall a few months ago. The seat is stuck in the low position--which makes it hard for me to see out (I'm 5'2"). I took it to the Chevy house. Just got a call from them saying that if they fix it, it will cost me $348. I told them it's from the recall. They said no, the recall was just to make sure the bolt on the seat was not loose. Nothing to do with the seat adjustment.
Carolina Viera wrote on January 30, 2021 - 9:27pm Permalink
My passenger side won't go back up. My daughter reclined it more to see if it went back and it just got stuck. Now she has to put a pillow to prop herself up while her brothers are squashed in the back seat. We are so uncomfortable with this seat being stuck this way. The dealership told me the key was the only thing that was recalled. But now there's been a recall with the seats and i wasn't told. I really enjoyed my flip key. The seat should have been made a bigger issue than the key.
Rosalie Gutierrez wrote on October 18, 2021 - 2:42am Permalink
I was upset when my flip key was taken away on the recall. But got it back. This is what you do. Get a screw driver and a hammer and break the black plastic or whatever the new key is make of. Take the square key and put it back into the flip key fob like it was originally. Put a small amount of super glue in it and you now have your flip key back
Carolina Viera wrote on January 30, 2021 - 9:28pm Permalink
When can i get my seat fixed without being charged??