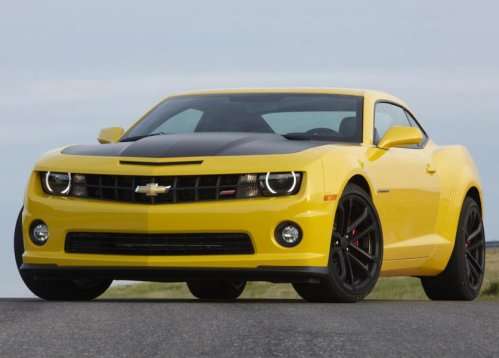 It has been months since General Motors offered up the first official production information on the 2013 Chevrolet Camaro 1LE but as we near the launch of the 2013 model year vehicles – GM has offered up a handful of official images of the new Mustang Boss 302-fighting, Bowtie-clad muscle car.
Advertisement

The 2013 Chevrolet Camaro 1LE is based on the 1SS and 2SS packages which includes the 426 horsepower LS3 V8 and a unique Tremec TR60-60MM6 six-speed manual transmission featuring close ratio gearing, ideal for road racing. The power is funneled to a rear differential with a steeper 3.91 gear ratio for improved acceleration while the Tremec transmission uses an air to liquid cooling system found on the Camaro ZL1 to keep the temperature down during long stints of track time.

Next, GM’s engineers turned to the handling capabilities of the 2013 Chevrolet Camaro 1LE, adding unique monotube rear shocks in place of the twin tube units found on the standard Camaro SS. A 27 mm solid front stabilizer bar and 28 mm rear stabilizer bar have been added in place of the smaller standard units for improved suspension and chassis rigidity while a strut tower brace helps to improve the steering attributes of the 1LE when hammering the turns.

Helping the 2013 Camaro 1LE get traction as it tears out of turns is a set of 285/35ZR20 Goodyear Eagle Supercar G2 tires wrapped around lightweight 20 inch by 10 inch aluminum wheels that are based on the rollers found on the Camaro ZL1 supercar. A set of high strength rear axle shafts have been added for improved endurance and to handle the extreme levels of traction while other items such as the wheel bearings, tow links, rear shock mounts and fuel system have been sourced from the ZL1 to handle the rigors of track life.

All of these features allowed the GM high performance engineers to tune the suspension of the Camaro 1LE in a manner that would yield that best possible handling characteristics on the track and on the open road without being too brutally stiff for every day street use.

Aesthetically, the 2013 Chevrolet Camaro 1LE stands apart from the Camaro SS with a matte black hood, a matte black splitter and a matte black rear spoiler in addition to the aforementioned wheels. The front splitter and rear spoiler are designed to improve high speed downforce while also improving general aerodynamics. Inside, the 1LE wears the flat bottomed steering wheel and the short throw shifter – both of which are borrowed from the ZL1 and wrapped in sueded microfiber.

GM is working to get the approval of the SCCA for the Camaro 1LE in the Touring Class and once these higher performance Camaro SS models hit dealers around the country – GM may finally have an answer for the incredible Ford Mustang Boss 302. It is no secret that the 2013 Chevrolet Camaro 1LE is targeting the 2013 Ford Mustang Boss 302 and once these road race ready Camaros hit the street, it will be interesting to see how the two compare in direct head to head competition. The Camaro has a tuned suspension system and will include high performance braking components but the Camaro 1LE will be at a slight disadvantage compared to the 440 horsepower Boss 302. That is nothing that cannot be fixed quickly with an engine tune but stock for stock – that power difference could make the Boss 302 tough to overcome.

One place where the Camaro 1LE could have an advantage over the Mustang Boss 302 is price, as rumors suggest that the 1LE will carry an MSRP under $40k while the Boss starts over $42k. However, the guy waiving the checkered flag never asks how much a car costs.

Check out the gallery on the right by clicking any of the thumbnails for a closer look at the 2013 Chevrolet Camaro 1LE.